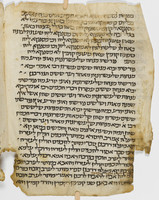 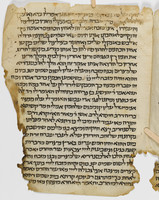 The massive text of the Talmud was completed in approximately the seventh century of the common era.  The earliest Talmud manuscripts tend to demonstrate the oral roots of the text, with many variants in spelling from today's printed editions.  Very few manuscripts of the Talmud remain from the period following the codification of the Talmud, and the leaves shown here provide a rare example from the tenth century.

This manuscript was found in the Cairo Geniza, an ancient repository of Hebrew manuscripts located in a synagogue in Fustat (Old Cairo), Egypt.