The Centennial Exhibition, 1996 > Foreword to the Printed Catalog, 2000 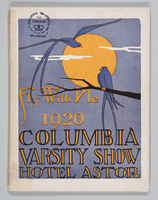 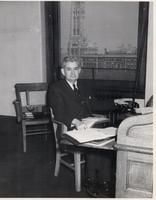 The initial challenge in planning this exhibition was to find ways to make visual what is essentially not visual at all. As anyone knows who has taught a course in Music Humanities, music is notoriously resistant to translation, let alone in terms that are immediately understandable to everyone. Similarly, in tracing a century of musical life on Morningside Heights, one encounters a vast quantity of material that cannot easily be translated into an interesting exhibition, especially one designed to reach general as well as initiated viewers. It quickly became clear, however, that the university's various collections and archives are as rich and diverse as any curator could wish. This exhibition thus became a dual celebration, not only of a singularly important occasion, but of the collections from which all these materials have been gathered. Mounting such an exhibition presents its curator with a range of tasks, scholarly, historical, and musical; but it also requires one to lay detective, and to be willing to risk the reasonably educated guess, for sources of information often do not agree, and records are occasionally incorrect. In the end, one of the keenest pleasures has been the opportunity for a fascinating, puzzling, illuminating, poignant, surprising, often humorous crawl through the attic of a great university.

Sometimes the explorations yielded items of great historical or scholarly interest — extended essays or departmental reports, for example — that simply did not lend themselves to the forum of an exhibition. Certain items, found casually filed away, all but hidden among records of the most mundane kind, would catch one by surprise and capture the imagination: think of a torn page of quickly-typed notes, meant to do no more than record someone's spontaneous and unguarded response to a situation or an event. The Department of Music's bicentennial is thus in the making even as we gather here, for its true history is contained not only in significant events, but in the seemingly unimportant, day-to-day working of a large department in a very large institution.

This exhibition seemed to provide an unprecedented opportunity to reveal aspects of the department's work and teaching and collegial life to those who would otherwise have no experience of them. Scholarship, research, and music performance have their own audiences, usually already knowledgeable and informed. But one of the department's guiding principles, long guilt into its curriculum and activities, is that music should be made available to a wide audience of generalists as well as specialists, to those whose musical education and experience have not caught up with their curiosity or their interest, and indeed to those who have lacked any kind of exposure to music. An exhibition, it seems to me, addresses that principle in an immediate, visual, if also rather summary and symbolic manner. It can serve as an introduction, or an invitation, as it were, to those who might know little of music as it is offered here. Who can tell where such exposure might lead?

One of the most surprising discoveries was the degree to which this century-old department reflects the original vision of its founder. Edward MacDowell's tenure at Columbia was lamentably and tragically brief, and his work here is not widely known. Indeed, in extended conversations with the curator of "A House of Dreams" at the Museum of New Hampshire History in Concord, and also with the makers of a documentary, "MacDowell: An American Artist's Colony," produced for New Hampshire Public Television, it emerged that the depth and significance of MacDowell's involvement with Columbia was largely unknown outside the circle of those familiar with his life and work, and that his brief tenure here was accordingly viewed by some as a relatively less important chapter in his career. On the contrary, being called to become Professor of Music at Columbia was a watershed event for MacDowell, both professionally and personally. This was in every way a fateful appointment, for the man and for the institution that had chosen him.

He seems an altogether extraordinary figure, this young composer who took up his new post as if born to university life, with a full-blown philosophy of education already formulated. In fact, he himself had had virtually no formal general education beyond the age of fourteen, and had never attended college. He was blessed with boundless intellectual curiosity, and as is often the case with those who take on the responsibility for educating themselves, he was a tireless and voracious reader. By the time he was in his early thirties he had earned an international reputation as the foremost American composer of his day and was widely known as a virtuoso pianist, winning the enthusiastic support of Liszt, among others. Nothing in his experience, however, had prepared him for the unexpected turn his career had taken. Yet he began his professorship at Columbia with an astonishingly broad and rounded view of what a department of music ought to be and what it ought to do. When we consider that there was no precedent in American higher education for what MacDowell envisioned for music at Columbia, his achievement seems all the more remarkable. And by all accounts, he was a gifted, esteemed, greatly beloved teacher, possessed of an irresistible personality and a puckish wit, who had a profound influence on his students.

Because of his break with President Nicholas Murray Butler, MacDowell did not remain at Columbia long enough to see his plans fully realized, nor did he live long enough to feel vindicated. But music at this university, perhaps rather ironically, still very much corresponds to MacDowell's hopes and dreams for it. As a footnote to these remarks, I would draw your attention to a 1971 Ph.D. dissertation by Marjorie Morgan Lowens, The New York Years of Edward MacDowell.

As the other events of the weekend of centennial celebrations have demonstrated so impressively, the many facets of music for the specialist tend to speak for themselves in their respective scholarly, composing, and performing communities and in the area of graduate education, in which music at Columbia has had so strong an impact. It is more difficult to illustrate the role of music as it is geared to the undergraduate liberal arts student, but this aspect of the Department of Music's mission continues to be of enormous importance, requiring no less of our attention on this occasion.

The Spring 1966 issue of Columbia College Today was devoted largely to music, focussing on the Department of Music and its faculty. A laudable, welcome journalistic and public relations effort, to be sure - but this issue of the magazine was not content to merely provide its readers with up-beat reportage of departmental news. Rather, in a series of excellent articles, it treated the wider questions surrounding American music education, and that news was not at all good. George Charles Keller wrote a strong editorial, and in separate srticles Paul Henry Lang and Howard Shanet took a long, hard look at music education, not only at the undergraduate level, but in elementary and secondary schools,a nd they were greatly troubled by what they saw. Interestingly enough, they were articulating the same kinds of concerns that Edward MacDowell had voiced upon his arrival at Columbia, seventy years earlier. Sad to say, we have very little reason, as the century comes to its close, to challenge their appraisals. And how indeed was music to thrive in so chill and inhospitable a climate?

In the face of a general, nation-wide lack of awareness, Columbia's stance has given it a singular osition in higher education with respect to music. This Department of Music was among the earliest to be established in America. But its distinction lies in part in having kept faith with one of its founding priciples: that music has not only a rightful but an essential place int he scheme of a liberal arts education. To my knowledge, this department may well have been the first in the nation to have adopted that premise as fundamental and integral to is curriculum. Of course, it would be ingenuous in the extreme to suggest that he problems surrounding American music education can be solved by any one approach - Columbia's included - to music as one of the humanities, even if every institution in this land were to subscribe to it. The point is that while the educational system at large has remained for the most part seemingly unconcerned and silent, Columbia's Department of Music took the advocate's role right from the beginning, and it has never wavered. Course offerings for the general liberal arts sutdent as well as for the musician-in-training have figured in its curriculum for a hundred years. That record speaks for itself.