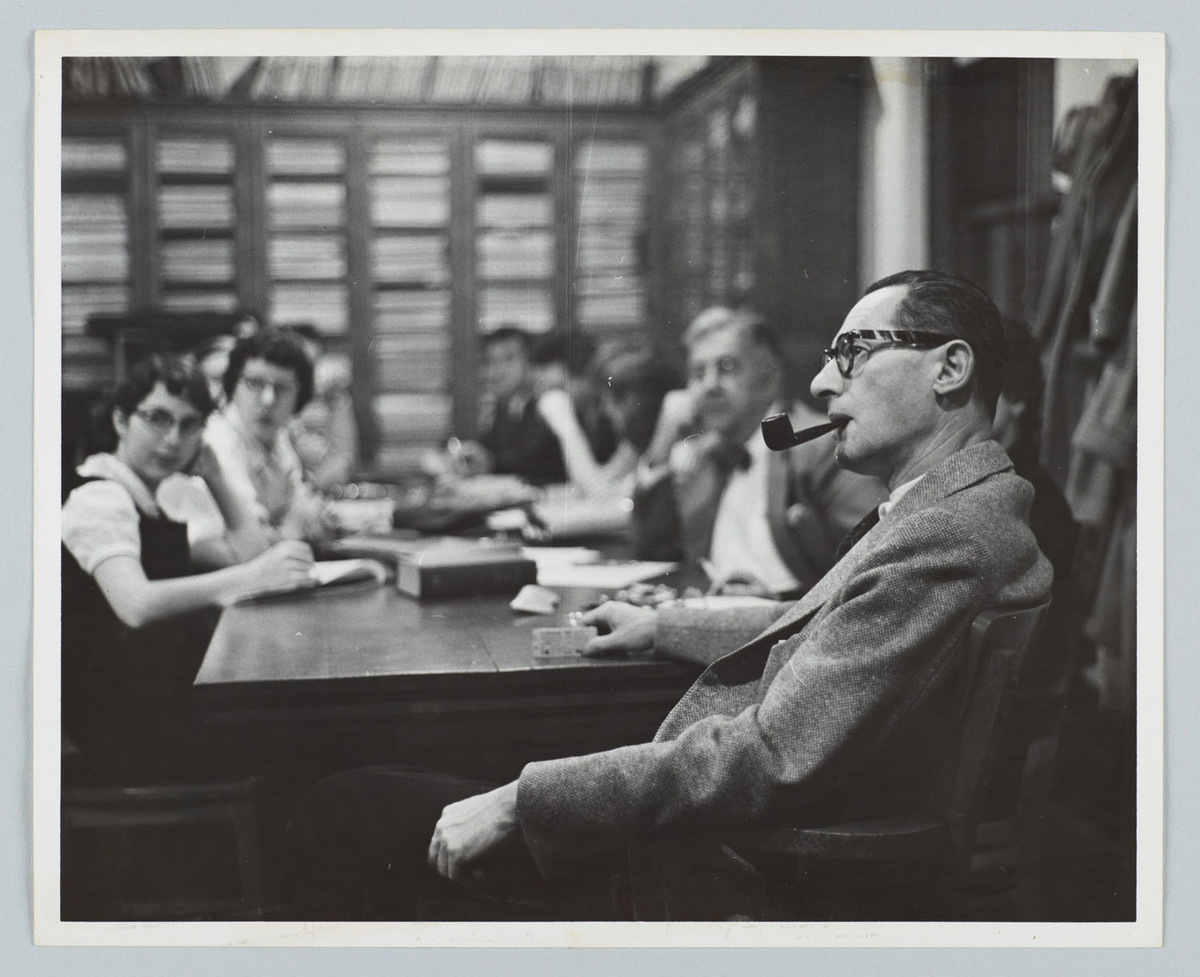 It would be difficult to overestimate the role of Paul Henry Lang in the history of musicology in America. Born in Budapest, he was trained at the Royal Academy of Music there and at the Universities of Heidelberg and Paris. Coming to the United States on a Rockefeller Foundation Fellowship, he received his Ph.D. from Cornell University in 1932.

Musicology had its roots in Europe and the earliest musicologists in American institutions were European-trained. But musicology as a separate discipline had yet to come of age in America. Even Lang’s mentor, Otto Kinkeldey – interestingly a student of MacDowell’s – had begun his career in Europe, returning to the United States to head the Music Division of the New York Public Library in 1914 and then to become University Librarian at Cornell.

The seminar room shown in this photograph was on the 7th floor of the School of Journalism. The glass cases in the background housed portions of the University Orchestra’s library.

Columbia’s graduate program under Lang was in the forefront among American universities. Meanwhile, Lang had taken a primary role in launching the American Musicological Society, and had succeeded Carl Engel as Editor of The Musical Quarterly. In 1954 he was appointed chief Music Critic of the New York Herald Tribune, succeeding Virgil Thomson. At Columbia he established the Collegium Musicum and the Musicology Colloquium.

Lang’s landmark contribution to music literature, Music in Western Civilization, was first published in 1941. Recently reprinted with a new introduction by Leon Botstein, it remains the work for which he is best known. The book bears the distinctive hallmarks of his style: a breadth of knowledge and perspective, a deeply humanistic outlook, and a literary approach to scholarly writing.

In the half century since Paul Henry Lang opened a broad realm of possibilities for research in the Department of Music, the discipline now known as historical musicology came to be deeply rooted in American graduate education, a progress in which Columbia may claim a major role. Columbia’s Department of Music faculty remain at the forefront of the national and international scene in musicological research and related activities, and a number of those who have earned the Ph.D. in the department’s program in historical musicology have gone on to make significant contributions to the discipline.