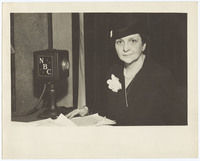 Sent to Perkins in an envelope postmarked 28 February 1933, this photograph would have been taken just as her appointment as Secretary for Labor was announced.

President of the United States

[Invitation to the] Inauguration of the President … March fourth, Nineteen hundred thirty-three

President of the United States

Among the speakers at the gala dinner held at the Hotel Commodore in New York to honor the new Secretary of Labor were Rose Schneiderman, James Farley, Eleanor Roosevelt, and the honoree herself.