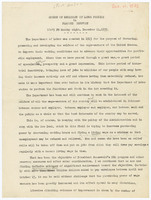 The new agencies and programs created during the first year of Roosevelt’s tenure were justified in terms of economic recovery and reform. They included the Agricultural Adjustment Administration to restore fair prices for farm products; the Tennessee Valley Authority to provide electricity and flood control, and the Civilian Conservation Corps to put young men to work. But it was the National Recovery Administration (NRA) that was the centerpiece of “the first New Deal,” as the programs created in 1933 became known.

The NRA was modeled in large part on the government-business partnership established by the War Industries Board in WWI. Its symbol of cooperation and patriotism was a blue eagle holding a cogwheel. The NRA allowed businesses to “stabilize” prices (that is, to fix them) but, in turn, workers got higher wages and the right to organize and bargain collectively in unions. The voluntary “blanket code” businesses were supposed to adopt included a minimum wage of 30-40 cents an hour, a maximum work week of 40 hours, and the end of child labor.

But the NRA was only partially successful because it couldn’t effectively administer the codes without an enforcement mechanism, which was not provided. The codes also tolerated labor inequalities, for example, allowing blacks and women to receive lower wages for doing the same job as white men. In the end, large companies dominated the code writing process and used it to drive up prices, limit production, lay off workers, and divide markets among themselves at expense of smaller competitors. In 1935 the Supreme Court ruled the NRA unconstitutional, but other laws would take its place.