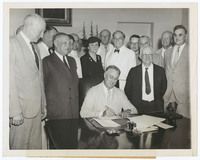 In June 1934 Roosevelt sent a message to congress announcing his support for some form of “social insurance” that would address unemployment and old age. This concept eventually became the Social Security Act, which was drafted to create a system of insurance rather than one of welfare. Business response varied. The National Association of Manufacturers called it the “ultimate socialistic control of life and industry” but the Chamber of Commerce was generally supportive.

Roosevelt wanted Perkins to insure the Act passed and told her, “You believe in it. Therefore I know you will put your back to it more than anyone else and you will drive it through.” And Secretary of Labor Perkins did work tirelessly for its passage as the chairman of the Committee on Economic Security, created by executive order to “promote greater economic security.”

The Social Security Act created ten different programs to assist Americans in need. Although most people associate “social security” with the retirement pension, the act also provided direct assistance to the elderly, poor, blind, dependent children and their mothers. It also established a cooperative federal-state system of unemployment compensation financed by federal taxes on employers. Social Security was tremendously beneficial to millions of citizens, but it also excluded domestic workers and agricultural laborers, thus large numbers of blacks and women were not helped by it.