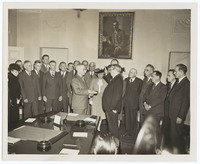 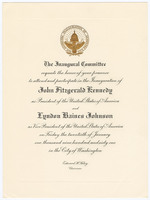 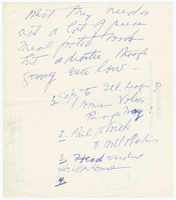 When Franklin Delano Roosevelt died on April 12, 1945, President Truman kept the cabinet intact, but soon asked Perkins and others to resign as of July 1. Their relationship remained very cordial, however. Truman always remembered that she had given him his first federal job as director of the Federal Reemployment Service in Missouri in 1933.

He asked her to consider what other government jobs she would like to have, and she asked to be head of the Social Security program, which she called the act nearest to her heart. Truman said he would consider it. In October, he sent her to the ILO conference in Paris. She had agreed to write a biography of FDR, and The Roosevelt I Knew appeared in the following year, published by Viking Press to great critical and public acclaim.

In 1946, instead of Social Security, Truman appointed her to serve as one of three Federal Civil Service Commissioners, a post she held until 1952 when she resigned following the death of Paul Wilson, her husband. From then until her own death in 1965, she led an energetic life of teaching, public speaking and writing, with longer stays at Princeton and the University of Illinois.

In May 1955, a young labor-relations professor at Cornell, Maurice Neufeld, asked her to speak at his university. The event was a great success and she was asked to join the faculty as a visiting lecturer in Cornell's School of Industrial and Labor Relations. In the spring of 1960, she was invited to be a guest in residence at the Telluride Association, then all-male, a 27-member residence on Cornell's campus. She accepted with delight. She continued to lecture at Cornell, although her health and eyesight were failing, until two weeks before she died.