In this broadside, Perkins is one of five members of “America’s Invisible Governors,” named with thirty other “alien-minded New Dealer ‘advisors’ … all owing allegiance to the Frankfurter-Brandeis-Baruch-Morgenthau Monopoly … directed by Professor Felix Frankfurter.” Note that Perkins’s long-time secretary, Frances Jerkowitz, is included in her triangle headed “Friend of Aliens.” 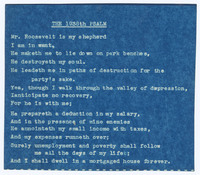 FDR, his administration, and The New Deal were not without enemies. This anti-psalm states “Mr. Roosevelt is my shepherd / I am in want, / He maketh me to lie down on park benches, / He destroyeth my soul … Surely unemployment and poverty shall follow me all the days of my life; / And I shall dwell in a mortgaged house forever.”

H. Res. 67 [Resolution for the impeachment of Frances Perkins, Secretary of Labor] January 24, 1939

[Statement before the House Judiciary Committee in reply to House Resolution 67, Impeachment of Frances Perkins]

This eight-page typescript appears to be the copy that Perkins used in her hearing before the House Judiciary Committee. In conclusion, she stated: “It is because I share the confidence of other Americans in the capacity of our institutions to protect me against injustice that I have satisfaction in the consideration of these charges, and my denial of them … This faith exists and must be confirmed daily by those of us who hold high office so that liberty may not perish from the land.”

Speech of Hon. John A. Martin … Dismissal of Impeachment Proceedings Against Frances Perkins, Secretary of Labor [with printed Envelope]