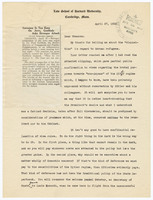 Letter, with clipping, to Frances Perkins

In this heart-breaking letter sent by her dear friend concerning the Jews of Europe, Felix Frankfurter wrote: “For once in my life I wish that, for a brief period, I were not a Jew. Then I would not have even the appearance of being sectarian in writing you as I have written.” 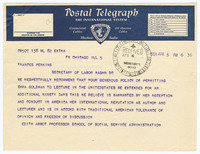 Of the many letters of support and of outrage received by Perkins in relation to the case of Emma Goldman, these two will serve: a telegram in favor of extending her visa, signed by many members of the University of Chicago faculty, and one in protest (below) to her being admitted to the United States. 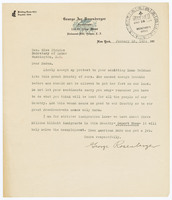 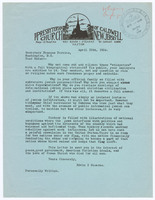 Typed letter, one of many received in the “Whispering Campaign” against Frances Perkins

In this “Personally Written” letter to Perkins, the Pastor of the First Presbyterian Church of Caldwell, New Jersey, asks “Why have you stopped alien deportations?” calling for her to give a “full biographical statement,” and asking “Why is your official family so filled with subversive jewish personalities?” 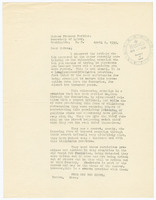 An anonymous letter to Perkins concerning anti-Semitism, “From One Who Knows.” 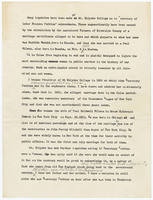 [Testimony on behalf of Frances Perkins]

Mount Holyoke President Mary Wooley presented this statement, probably to the House Judiciary Committee, writing: “As a believer in fair play I respectfully request that your committee investigate … who is responsible for the widespread distribution of these false and evidently maliciously intended statements, which for some unknown reason have been directed at an able, honorable and patriotic public official who has made an exceptional record as an administrator and is generally recognized as the most capable Secretary of Labor in the history of that department.”