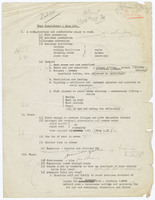 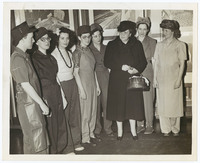 When the Supreme Court ruled the National Recovery Act unconstitutional in May 1935, many of the New Deal’s programs that sought to improve working conditions were interrupted. For the next several years, Roosevelt, Perkins, and many others advocated legislation to protect workers. While campaigning in Bedford, Massachusetts, Roosevelt received a letter from a girl who told of having her weekly factory wages cut from $11 to as little as $4. He told a reporter, “Something has to be done about the elimination of child labor and long hours and starvation wages.”

In 1937 the president sent the bill that became the Fair Labor Standards Act to Congress with the message that a “self respecting democracy…can plead no justification for child labor, no economic reason for chiseling workers’ wages.” The Act was the last of the major New Deal efforts. It set a minimum wage, a maximum work week, and banned child labor. It created a Wage and Hour Division within the Department of Labor, which had the power to investigate any manufacturer and enforce standards in courts. The Act covered about 11 million workers. While it did protect children in manufacturing jobs, it did not cover those in agriculture, and the children of migrant workers continued to be exploited.

In spite of this law and others, the record of the New Deal with regard to women was mixed. As early as 1930, there were over 10 million women working outside the home as domestics, farm laborers, nurses, teachers, secretaries, and garment workers, but many women’s jobs were not covered by the new laws.  To a great degree, the women’s reform agenda of the New Deal was about protection, rather than equality, partially because it grew out of progressive era feminism, which stressed special protections for women, not equality.