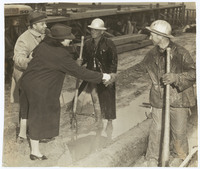 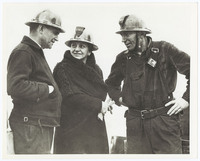 The emergence of a powerful trade union movement was one of the most important social and political developments to result from the New Deal. When the Supreme Court declared the National Recovery Act unconstitutional, it invalidated the Act’s guarantee of collective bargaining. In response, Senator Robert Wagner of New York and others introduced what became the 1935 National Labor Relations Act (the Wagner Act). The Act created an enforcement mechanism in the form of the National Labor Relations Board, which could require employers to bargain with unions.  The effects were enormous. There were about 3 million union members in 1932, less than 8% of the employed population, but by 1939 union workers totaled almost 9 million, or 18%.

Part of this increase was due to John L. Lewis, the leader of the United Mine Workers, who created what became the Congress of Industrial Organizations (CIO) in 1936. The CIO organized workers based on their industry rather than by their skill or craft, as the American Federation of Labor had done. The power of this new “industrial unionism” was manifest in the great “sit-down” strike at General Motors, which forced the company to recognize the United Auto Workers in 1937.

Labor militancy was a powerful force across the nation during the New Deal. In 1934 a strike of longshoremen had tied up ports along the west coast for two months when San Francisco employers used strikebreakers to move some goods. The action precipitated a riot in which police killed two strikers. Harry Bridges, a longshoreman from Australia living legally in the U.S., persuaded union members to launch a general strike, which paralyzed the city for four days. At the time Roosevelt was on vacation aboard the USS Houston while Perkins was in charge of the response to the strike. Although some urged the general strike be broken by force, Roosevelt, advised by Perkins, remained calm and it ended peacefully in four days when strikers agreed to arbitration, which led to union recognition for the longshoremen.