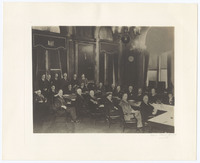 Franklin Delano Roosevelt (1882-1945) was elected governor of New York as a Democrat in 1928, even though Al Smith lost the presidency that year. Many of the policies Roosevelt put in place as governor, from unemployment relief to public utility regulation, would become part of federal programs in the New Deal.

New York was the country’s largest manufacturing state and was hard hit by the Depression, but in early 1930 almost no one was willing to think in terms of state aid to the unemployed. Nonetheless, in March 1930 Roosevelt announced a Committee on Stabilization of Industry for the Prevention of Unemployment—making New York the first state to take such a step. And at a governors conference in the same year he committed himself to unemployment insurance, becoming the first political figure to do so. In August 1931 Roosevelt called the legislature into special session to address the crisis, saying that society has an obligation to “prevent the starvation or the dire want of its fellow men and women.” The legislature listened and passed the Wicks Act, which created the Temporary Emergency Relief Administration and New York became first state to provide state aid for relief. The program eventually aided 40% of New Yorkers.

Roosevelt appointed Perkins Industrial Commissioner of New York. She was the first woman to hold the role and oversaw thousands of employees in one of the largest state agencies. Cautious, Perkins advised him to think about it—“I’m not going to tell anyone so you’re not sewed up”—but Roosevelt wouldn’t change his mind. In her role Perkins worked to introduce unemployment insurance, expand public works, improve and expand state employment agencies, which were crucial at the time.