Writing “‘Depression’ is a word of despair. ‘Recovery’ is a word of hope,” Perkins here states: “The election of the fall of 1932 … was a vote against the depression – a bewildered people … voted overwhelmingly for what they called a ‘New Deal.’ And by that they meant apparently exactly what the term meant in its original card-playing sense in a different arrangement of trumps and aces in different hands.” 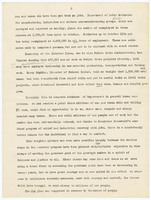 Speech of Secretary of Labor Perkins on Planned Recovery

This is the text of a radio address on the National Recovery Act delivered by Perkins at 10:45 p.m. on Monday, December 11, 1933. Note her emphasis of “living wage” by underlining the word “living” in paragraph three.

Chart #1 of a series on the “Industrial Recovery Bill”

This chart of Senate Bill No. 1712 and HR Bill No. 5664, 73rd Congress, 1st Session, shows clearly the two-part nature of the “National Industrial Recovery Act:” the “Mobilization of Industry into Trade Associations,” and “A Huge $3,300,000,000 Program of Public-Works Construction.” The program would be administered by the National Recovery Administration (NRA) and the Public Works Administration (PWA).