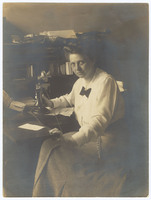 Frances Perkins as Executive Secretary of the Consumers’ League

Perkins was offered a job as secretary of the New York City Consumers’ League in April, 1910, a month before receiving her degree from Columbia. The following year she became Executive Secretary.

In these notes for a talk, or outline for an article, Perkins calls for research into the numbers of fires in the U.S. with comparison by such factors as size of population, local laws, and types of buildings.

In these notes Perkins also calls for research, in this case into industrial accident fatalities in the U.S., with comparisons by such factors as type of industry, and use of Coroner’s and hospital records.