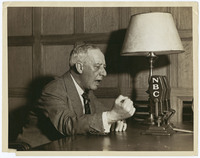 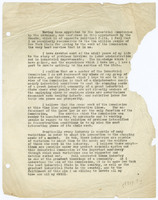 Al Smith (1873-1944), raised a devout Catholic on the Lower East Side of New York City, left school at 14 to support his family after his father died. He worked his way up in ward politics and was elected to the New York State assembly in 1903, became majority leader in 1911, and speaker in 1912. He was a strong advocate of the social responsibilities of government and first met Perkins when she went to Albany to lobby in support of legislation for the Consumers’ League. Smith helped her in the fight for the 54-hour bill, which prohibited men under 18 and all women from working more than 54 hours in a week.

Smith was elected governor in 1918 and, having worked with Perkins on the Factory Commission, he appointed her to the state Industrial Commission, one of the top administrative posts of the Labor Department. Perkins later became its chairman. She handled judicial and regulatory issues and presided over workmen’s compensation cases, which required a combination of technical knowledge, legal reasoning, sympathy, and common sense.

Smith served three more terms as governor and was a candidate for the Democratic presidential nomination in 1924, but lost to William G. McAdoo. In 1928 he won the nomination but lost to Herbert Hoover, partially due to his Catholicism, opposition to Prohibition and sympathies for immigrants. Smith did not return to elected office and came to strenuously oppose both Roosevelt and the New Deal even though in his own political career he had supported many ideas that later became enshrined in New Deal legislation.