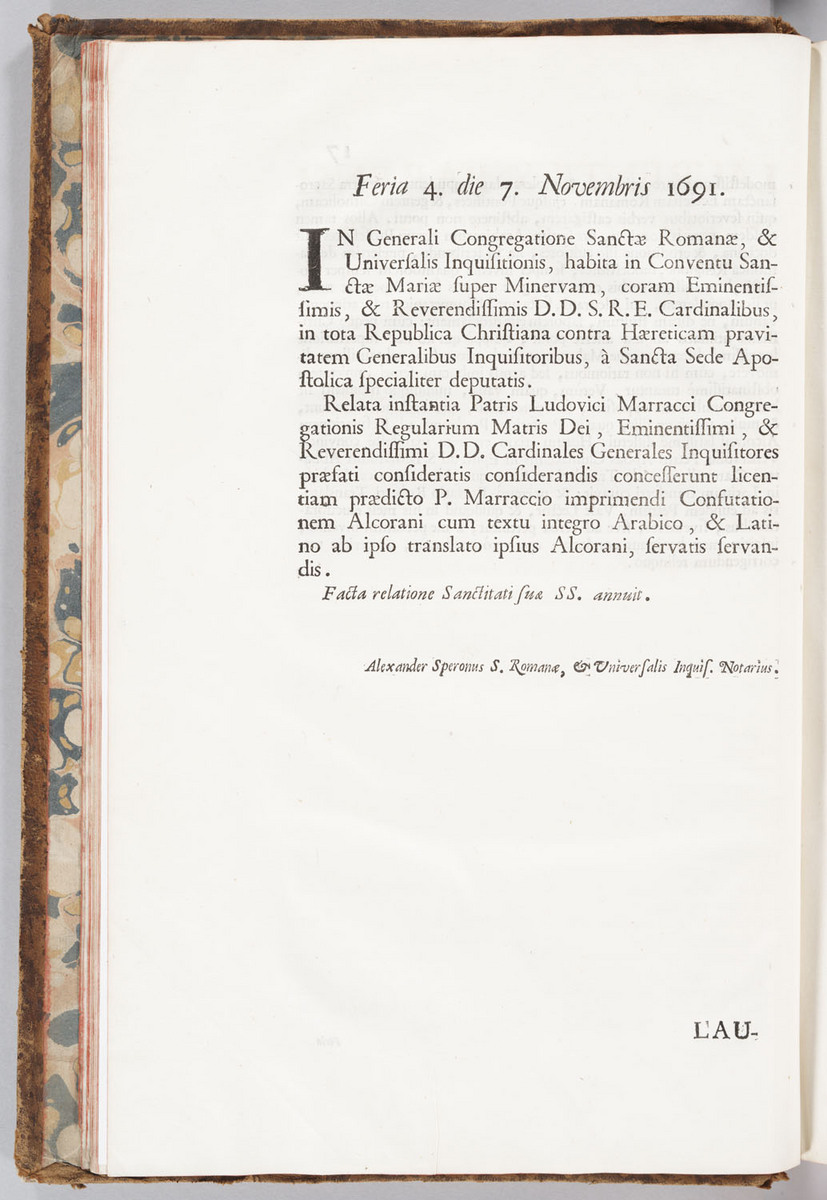 In 1698, when the critical Quran edition of Ludovico Marracci was finally published in northern Italy, its readers found printed transcripts of three legal documents at the beginning of the second volume, immediately preceding the critical edition of the Arabic text and its Latin translation.  The fact that not one, but three documents - two in Latin and one in Italian - were included suggests there was still considerable anxiety about the printing of the Arabic Quran by a Catholic press at the end of the seventeenth century.

The dated documents show that the administrative process of obtaining the permissions to provide public access to the Quran's Arabic text took about six years and  involved three different offices of the Catholic Church in Rome, Naples, and Padua.  The first and most important Latin document is the permission of the Congregatio Sanctae Romanae & Universalis Inquisitionis to print a theological refutation of the Quran followed by its complete Arabic text with a Latin translation.  This legal decision was notarized on 7 November 1691 in Rome.  As a first safeguard against any accusation of heresy, Marracci had requested the permission to publish his anti-Islamic treatise Prodomus ad refutationem Alcorani, so that his Quran edition appeared almost as an appendix.  In its published form, the anti-Islamic treatise was accordingly presented as the first volume of a two-volume work.  As a second safeguard, Marracci's edition observed the well-established principles of the Congregatio de Propaganda Fide and provided the Quran's Arabic text with a Latin translation.  These principles had been first established in 1629, when the directors of the Congregatio de Propaganda Fide had decided that all works not written in Latin or Italian needed to be accompanied by a translation and that censors had to authorize these works for publication in print.  The translation would ensure that the officially published books contained no doctrinal errors, whereas the approval process would guarantee that these publications promoted indeed the Catholic faith.

The second Latin document was issued by the head of Marracci's order, the Congregatio Matris Dei, on 8 January 1695 in Naples, informing Marracci that the censors of his order permitted the publication of his Quran edition.  The third document was written in Italian and issued on 31 January 1695 in Padua.  The secretary of the Refformatori dello studio certified that the local inquisition allowed public libraries in the city of Padua and the region of Veneto to add Marracci's Quran edition to their collections.  This document received a dated postscript on 2 October 1697, confirming that the Church had entered the decision into its registers.

Unfortunately, the paratexts do not provide any insights into how the legal approval process was coordinated with the actual labor of printing this demanding Arabic-Latin work as a large folio.  But it seems salient that the Congregatio de Propaganda Fide had already published the Prodomus ad refutationem Alcorani 1691 in Rome, as an independent octavo edition in four volumes.