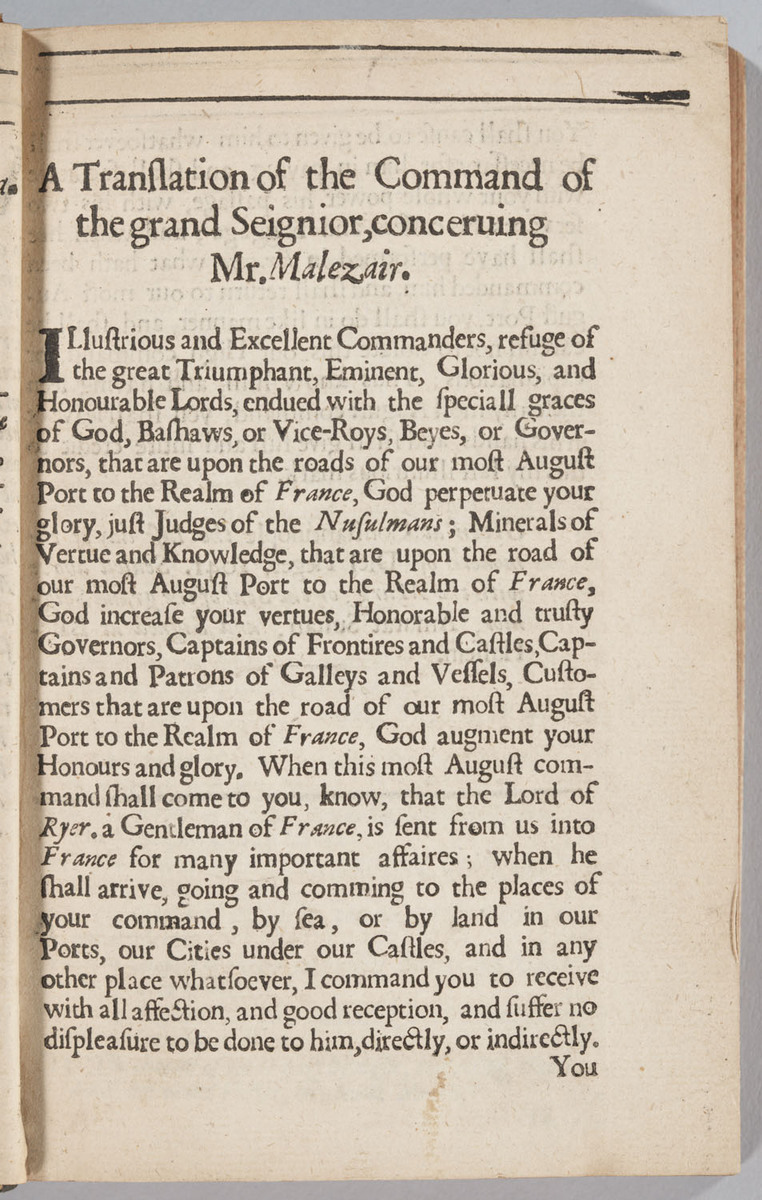 In Roman Catholic and Protestant states alike, Islam was legally defined as a heresy so that the printing and selling of the Quran - whether in Arabic or in translation - could be subject to prosecution.  Legal concerns about the distribution of heretic scriptures impeded the commercial circulation of Qurans in Christian Europe until the eighteenth century, and explain why about a century passed between the fifteenth-century emergence of letterpress printing and the first printed editions of Robert of Ketton's Quran translation in 1543.

André du Ryer published his Quran translation in 1647 with royal privilege.  Cardinal Mazarin (1602-1661) was the most powerful politician at the court of queen-regent Anne of Austria (1601-1666), and du Ryer dedicated his work to Pierre Séguier (1588-1672), the royal chancellor who in 1642 had also become the official patron of the Académie française.  The text of the Quran was preceded by an address to the reader and an introduction to the religion of the Turks.  The book concluded with the text of three documents concerning du Ryer's work as interpreter, secretary, and advisor to Henri de Gournay, comte de Marcheville, the French ambassador to the High Porte in Istanbul from 1631 to 1634.  Two documents are attestations in favor written by consuls of the city of Marseille, and the third is an order (firmān) of safe conduct issued by the Ottoman sultan Murad IV (1612-1640).

In contrast, the English adaptation of the French appeared in London in 1649, at the height of the Civil War.  In May 1648 the House of Commons had passed an ordinance against heresy, and Charles I was executed in January 1649.  The Quran translation was entered in the Stationer's Register on 23 April 1649 without its title or the name of the translator, and neither the printer nor the translator put their names on the title page.  While the English version preserved du Ryer's address to the reader, his introduction to Islam, and the three documents about his work in the Ottoman Empire, the British publisher added at the beginning a preface titled The Translator to the Christian Reader and the work ended now with an unsigned biographical sketch of the life of Muḥammad and a Needful Caveat, or Admonition, for Those Who Desire to Know What Use May Be Made of or If There Be Danger in Reading, the Alcoran signed by Alexander Ross (1591-1654), one of the chaplains of Charles I.

The Ottoman sultan's order of safeconduct is the most curious of the three added documents.  Even though Islam was considered a heresy and diplomatic achievements do not bear any necessary relationship to the mastery of Quranic Arabic, those who decided to publish this potentially heretic book in France and in Britain must have deemed it useful for their undertaking that the sultan as a Muslim ruler had once upon a time extended his protection to the translator.

The misspelt Nusulmans in the opening lines may indicate how quickly the English translation was rushed through the press.