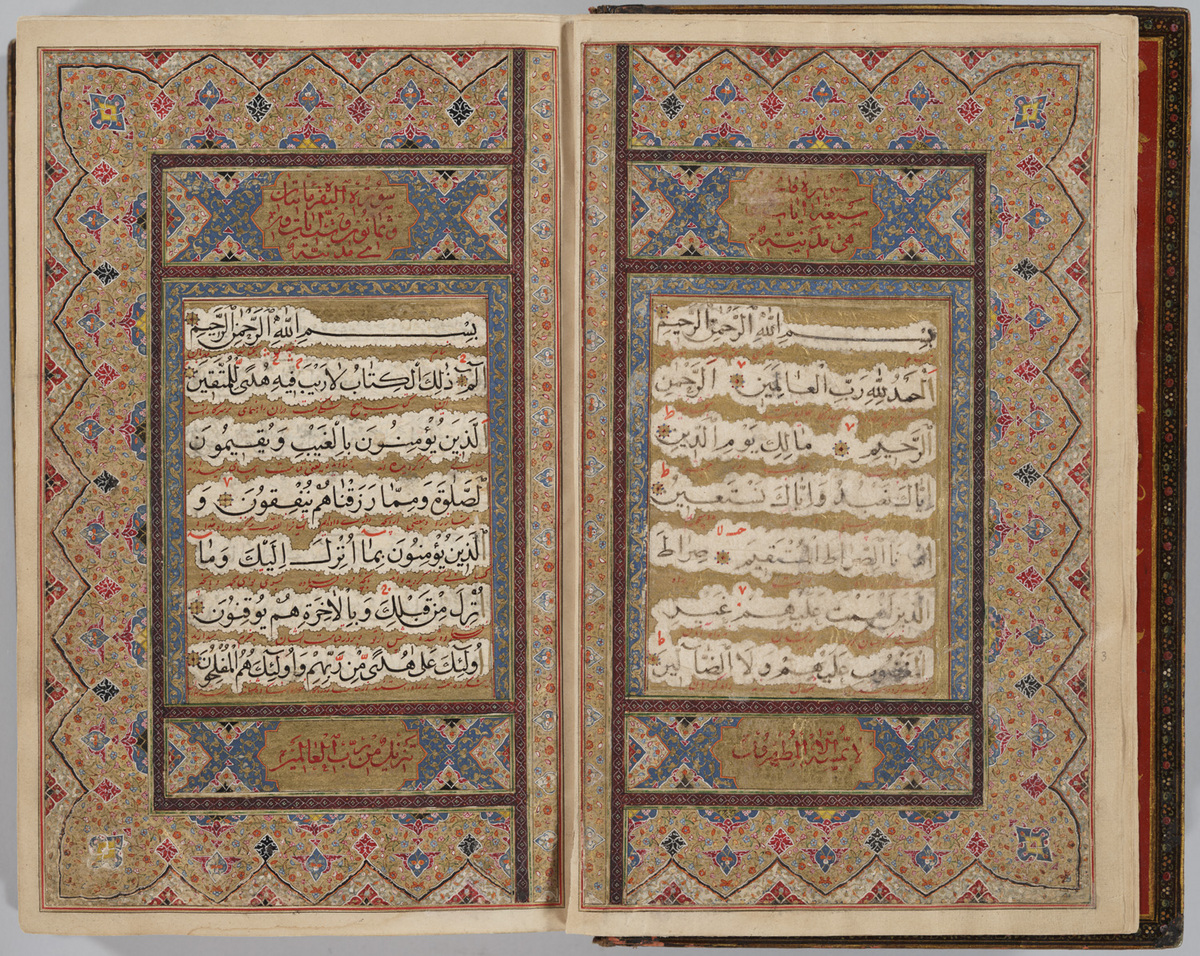 The opening pages of this eighteenth-century manuscript illustrate important conventions of Quran manuscripts.  The two pages together form a rich image for which the gutter functions as the axis of a symmetrical composition.  The pages are designed as mirror images with the marginal band of gold lobes holding the two blocks of text together.  The even distribution of the text on the opening pages - there are seven lines in each block - supports the symmetrical composition: the short sura 1 (sūrat al-Fatīḥa) on the right side is placed opposite the beginning of sura 2 (sūrat al-Baqara).

In the Islamic tradition, the suras are identified by their names - for example, al-Fatīḥa (the Opening) and al-Baqara (the Cow) - not by their number, that is: suras 1 and 2.  Each sura has a heading stating its name and whether it was revealed at Mecca or Medina.  In this manuscript, the red sura headings are written in the gold cartouches above the textblocks.  Although headings often indicate the number of verses (sing. āyah, pl. āyāt) in a sura - as is the case in this manuscript - traditionally the individual verses are not numbered.

The manuscript has a signed colophon, but the place of copying is not mentioned.  The symmetrical composition chosen for the beginning of the Quran text and the Persian interlinear translation suggest that the manuscript was produced in India.  Different scripts are used for the two languages: the Arabic text is written in a black Naskh, clearly distinguished from the Persian translation written in a smaller red Nastaliq between the lines.

At a first glance a Persian translation of the Quran appears as a blatant violation of the Islamic dogma of the inimitability of the Arabic Quran’s perfect language.  Yet Persian glosses of the Quran are preserved in tenth-century Quran manuscripts and in early Persian translations of Arabic Quran commentaries.  The point at which Persian interlinear translations of the complete Quran became fairly common is a matter of debate, since most of the extant Arabic-Persian Quran manuscripts were copied after 1500 CE.

Damaged Quran manuscripts, like damaged copies of the Torah, are not simply discarded.  The Quran is the word of God, and manuscripts damaged beyond repair were often recycled into apotropaic objects such as talismans and framed single leaves.  Moreover, manuscript production was labor-intensive, so that restoring a Quran manuscript was usually cheaper than purchasing a new copy.

The last pages of the original manuscript have been preserved, and the illuminated finispiece gives an idea of the lost matching frontispiece. 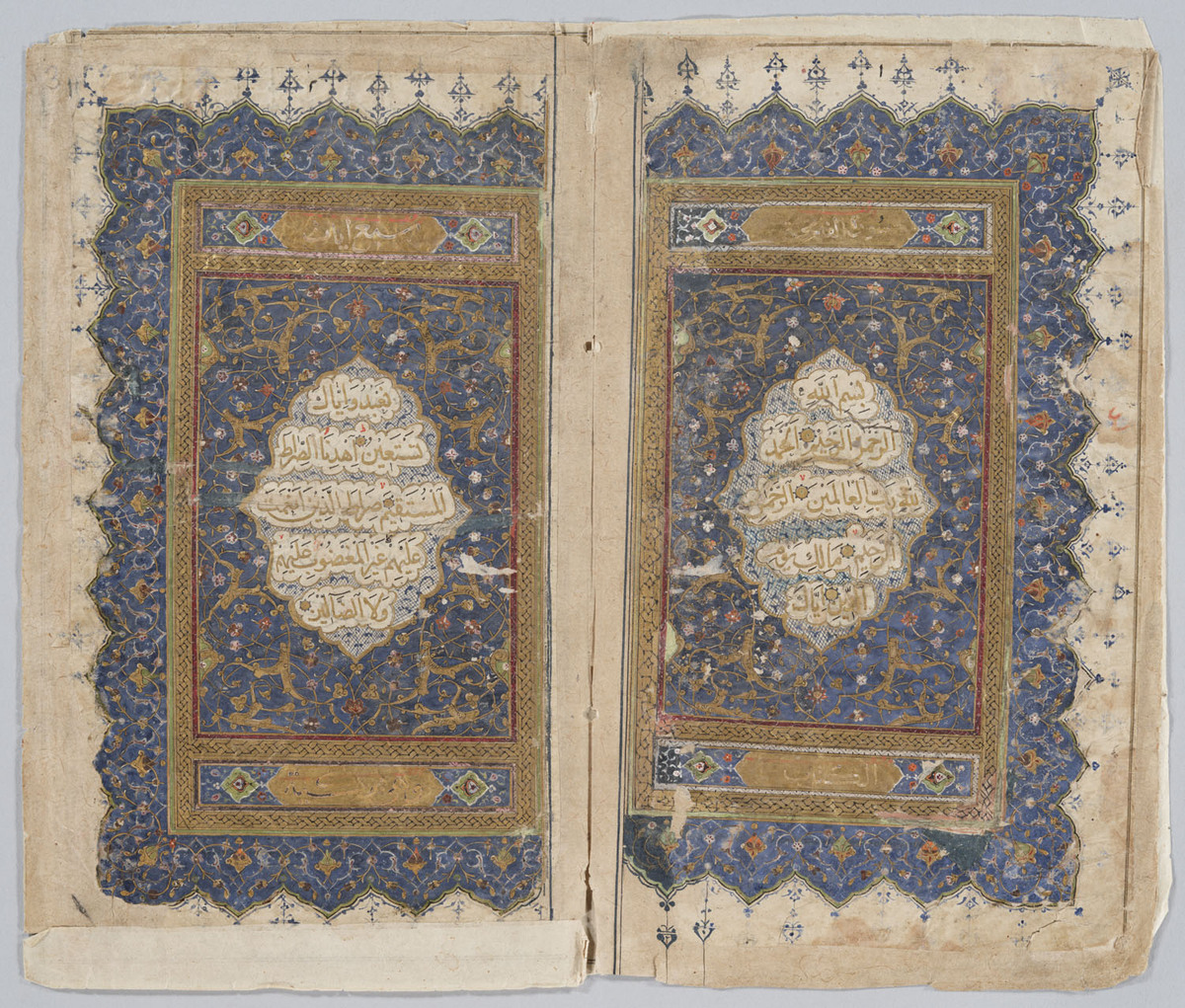 There are two sets of opening pages, one for sura 1 and another for the beginning of sura 2, in this undated Indian Quran.  For the sūrat al-Fatīḥa, the text is evenly divided between the two pages.  Despite the different color scheme and the use of lobed mandorlas for the text blocks, the design and illumination are structurally identical with the opening pages of the Indian Quran with a Persian interlinear translation.

For the beginning of the sūrat al-Baqara, the page design presents the standard solution for highlighting the beginning of a new work or chapter within an Islamic manuscript.  The illuminated headpiece on the right page functions as an eye-catcher, but the gold clouds between the lines and the gold arabesques - vines with buds and flowers - on the margins hold both pages together so that they form a whole, though asymmetrical, double page. 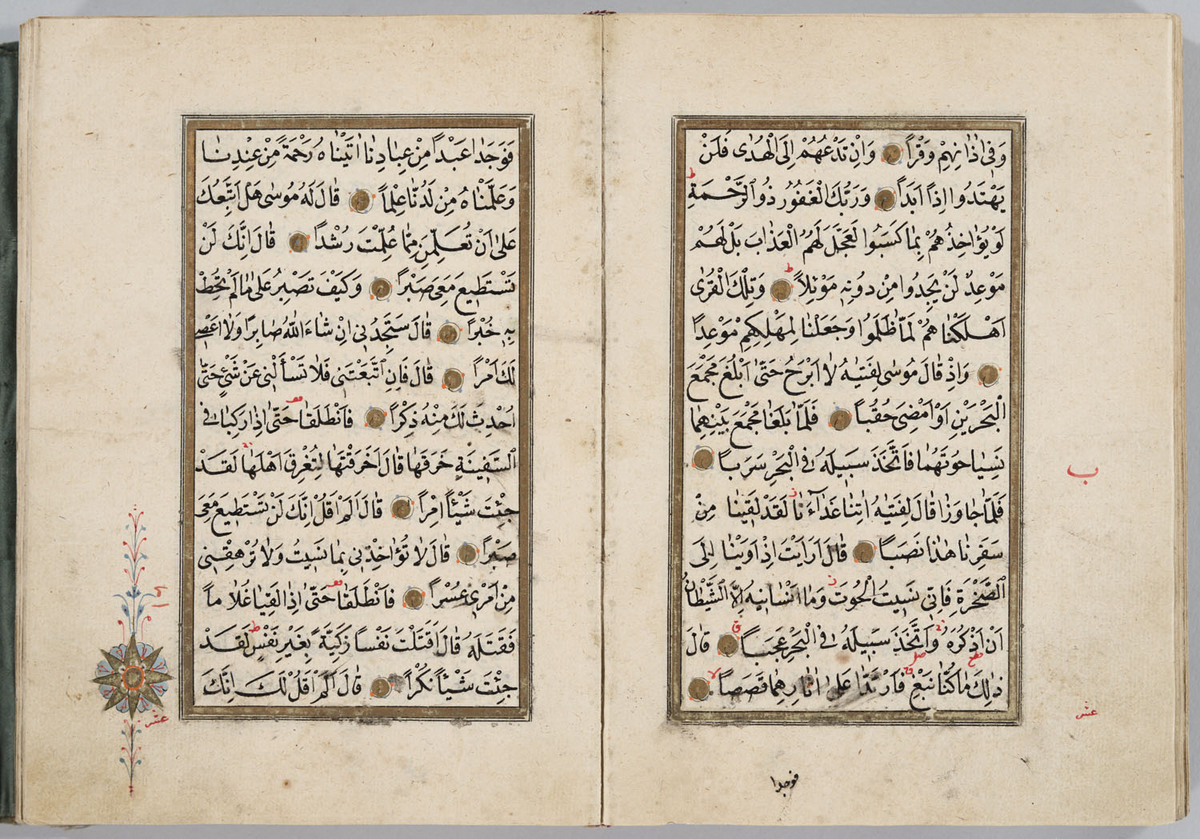 In this eighteenth century Ottoman manuscript the text distribution of the beginning follows the model discussed above for the Quran with a Persian interlinear translation: sura 1 on the right page and the first verses of sura 2 on the left page.  Since the Ottoman manuscript is less well preserved, the gold elements of its symmetrical illumination are discolored and appear as greenish.  The design of this double page is dominated by a multitude of floral forms, while geometrical elements are less important.

Like the other Quran manuscripts in the exhibit, this manuscript is a compact volume in the octavo range that does not contain any evidence of being made to order for a specific patron.  This observation suggests that after 1500 CE nicely illuminated copies of the Quran were an important staple of manuscript workshops that produced books for the middlebrow book trade.

On the double page with a section (18:57-75) from the sūrat al-Kahf (the Cave), the red word ʿushr on both margins marks groups of ten verses, while the floral spray on the left margin indicates the end of part (juzʾ) 15 after verse 18:74.

In many Ottoman Qurans, the text of the Quran is followed by a prayer about the Quran's completed recitation.  Although this Quran is an Ottoman manuscript, the colophon is written in Arabic, and not in Ottoman Turkish.  On the left page’s lower half, the colophon is clearly distinguished from the preceding prayer by its own frame and by the use of a different script.  For the colophon the scribe switched from Naskh to dīwānī, which in the Ottoman scribal traditions was customarily used for official documents.

After 1800, when large-scale commercial printing was adopted for the production of Islamic books in the Ottoman Empire, Egypt, Iran, and India, nicely illuminated Quran manuscripts remained competitive on the book market for the better part of the century because the printing of multicolored illumination was technically challenging and expensive.

The opening pages of this Ottoman Quran are missing, but the beautiful colophon suggests that these opening pages were also illuminated with care.  As in the other Ottoman manuscript, the scribe switched for the Arabic colophon to dīwānī, and did not mention a place name or a patron.  That the manuscript shows few signs of use - for example, the corners of the pages are not discolored from handling - provides further support for the assumption that this manuscript was not made as a book for daily reading or study, but as a precious object to be owned.

In this manuscript the functional illumination was transformed into flowers and floral sprays devoid of any additional inscription.  On the double page with a section (16:33-50) from the sūrat al-Naḥl (the Bees) the gold quatre-foils separate the verses from each other.  The floral spray on the right margin marks a group of verses, while the yellow flower on the left margin indicates prostration (sajdah) at verse 16:50. 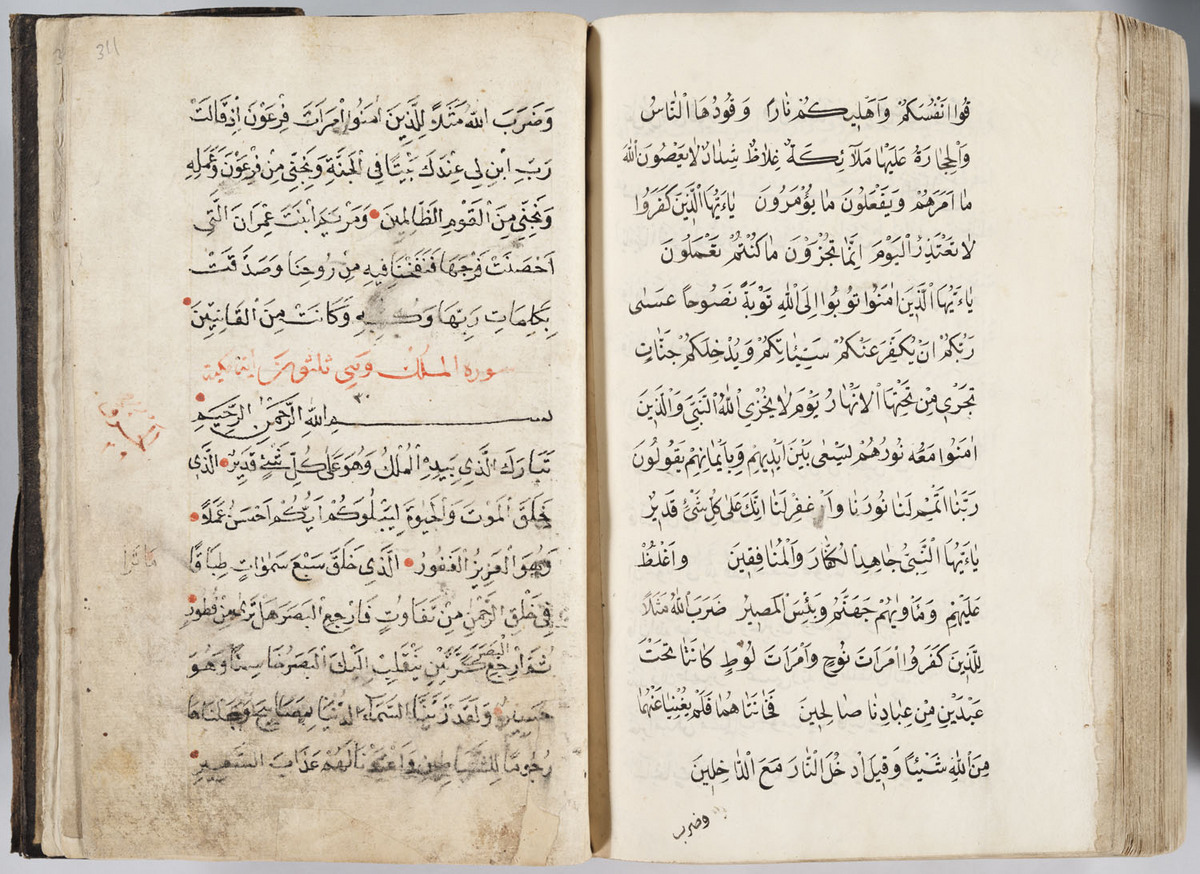 Eighteen leaves of this undated manuscript are later replacements.  The manuscript is opened to the end of sūrat al-Taḥrīm (the Forbidding) and the beginning of sūrat al-Mulk (the Kingdom), and the right page is one of the restored leaves.  Both scribes wrote an Ottoman Naskh.  But there are differences, for example in the execution of the letter kāf, and the replacement leaves are written in a more formal, controlled hand.  The second scribe followed the original page layout, and on both pages the lines have the same length and are identically spaced.  Yet the latter scribe did not complete the task: on the right page there are gaps, while large red dots separate the verses on the left page.  The red heading that marks the beginning of sura 67 and the red marginal note, which signals the beginning of part (juzʿ) 29, are further elements of the manuscript’s functional rubrication.

The absence of any painted decoration, such as an elaborate headpiece (sarlawḥ) or colored frames, is typical for Quran manuscripts produced in Ottoman Syria between 1600 and 1800.   While the manuscript has neither colophon nor ownership notes in Arabic or Ottoman Turkish, an English ownership note places the manuscript into nineteenth-century Anatolia.