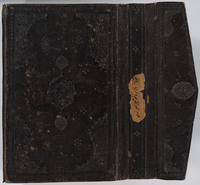 A binding that can be closed with a flap, like an envelope, is one of the binding types often used for Islamic books.  Three of the Qurans discussed above such envelope bindings.  The unsigned and undated bindings illustrate the outward appearance of Islamic books that circulated in the nineteenth century.  Their decoration draws on designs that are not particular to books or religious art, and which can also be found on Islamic textiles, rugs, or ceramics.

The blind-tooled binding with the characteristic central-medallion design is not original to Burke Arabic MS 3, for which it is slightly too narrow.  The inscription of the label, pasted unto the flap's fore-edge section, marks this book as an old Quran, suggesting that a previous owner valued the manuscript because it was not a contemporary copy.  The label's position reflects that in the Islamic lands books were usually stored lying flat, with the fore-edge outward.

The other two bindings are original to their Qurans.  The Ottoman example of Burke Arabic MS 5 documents how mainstream book production economized while emulating the appearance of much more expensive books.  Its square design combines blind-tooling with gilt painting to imitate gold tooling.

The binding of the lithographed Quran is noteworthy for its variation of the central-medallion design, which also decorates Burke Arabic MS 3.  The pendants at either end of the central medallion are shaped into crowns.  Their design seems to recall how the Qajar dynasty (1795-1925) portrayed the Kayanid kings who according to Iranian legend and folklore had ruled Iran before the conquest of Alexander the Great (356-323 BCE).