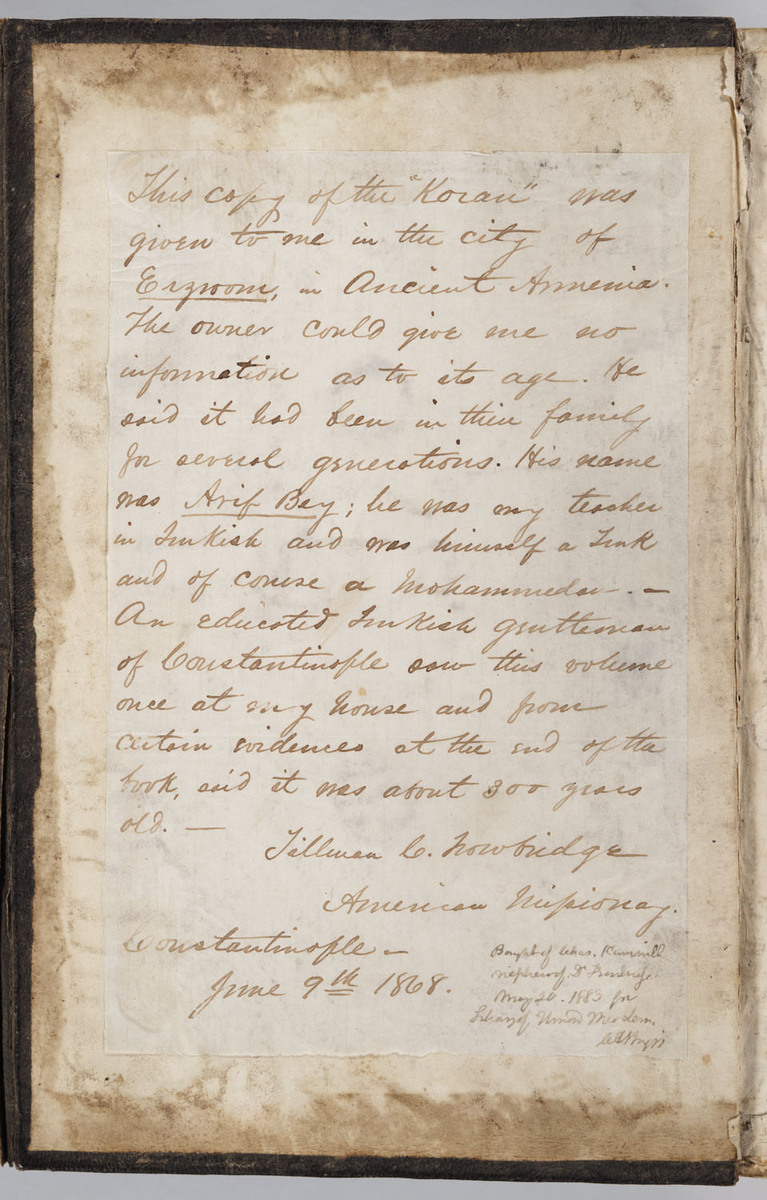 Ownership note pasted into the cover and dated 9 June 1868

Around 1790, the Second Great Awakening emerged as a powerful revival movement among members of many American Protestants denominations.  In 1810, Congregationalists and Presbyterians, often educated at prestigious New England schools and seminaries, established in Boston the non-denominational American Board of Commissioners for Foreign Missions (ABCFM).  After the Anglo-American War of 1812, the United States entered into a new phase of conquest and west-ward expansion across the continent, towards the Pacific.  At the same time, the ABCFM began to send missionaries into all corners of the world, even though these men and women had to rely on the support and the protection of the West European powers, as the United States did not yet maintain diplomatic representations or a colonial administration outside North America and Europe.

In 1820, when the first American missionaries arrived in the Levant, they were latecomers to the Holy Land.  Europe and the Middle East are connected by the Mediterranean and the Black Sea.  Since Russia and the Ottoman Empire shared borders with the Habsburg Empire in the West and with Qajar Iran in the East, people, ideas, and goods were moving relatively freely along centuries-old networks which served education, commerce, and pilgrimage across Eurasia.  In other words, Europeans could travel widely in the Middle East and South Asia, and members of Catholic orders, such as the Capuchins and the Dominicans, maintained missions in many Muslim societies.  Alexandria, Beirut, Aleppo, Izmir (Symrna), and Istanbul (Constantinople) were cosmopolitan urban centers of the Ottoman Empire.  But the population of Anatolia, the Levant, and the Fertile Crescent was also religiously and ethnically diverse, because the Ottoman Empire granted non-Muslim communities (Turkish sing. millet) independence in matters of religion and personal law, as long as they paid taxes and remained loyal subjects of the Ottoman sultan.

The original goal of the ABCFM was the establishment of a mission in Jerusalem, the center of Christianity, to evangelize Jews and Muslims.  This plan, though, could not be realized.  After the French occupation of Egypt by Napoleon Bonaparte (1769-1821) from 1798 and 1802, the Ottoman soldier Muḥammad ʿAlī (1769-1849) had seized power in Egypt.  While the Ottoman elites were embarking on reforms to transform their empire into a modern state, Serbians and Greeks were fighting on the Balkans for their independence.  Moreover, Muḥammad ʿAlī’s rise to power challenged not only the Ottoman rule of Egypt, it also weakened the Ottoman administration in the neighboring Arab provinces and gave Britain and France greater opportunity to extend their cultural and economic influence in the Levant and the Fertile Crescent.  Considering the region's political instability, the ABCFM changed its approach.  By 1834, the American Protestants had set up a press in Beirut, and the missionaries began to focus on marginal communities outside the urban centers, in particular members of the Eastern churches and Muslim minorities, such as Shiʿites, Alavites, or Druzes.

One of the American Protestants in the Ottoman Empire was Tillman C. Howbridge who in the mid-nineteenth century worked as a missionary to the Armenians in Erzurum (spelled Erzroom by Howbridge), in Anatolia.  Nothing is known about his life aside from a few tantalizing details preserved in a note, written in June 1868 in Istanbul and pasted into a Quran manuscript, which Union Theological Seminary purchased from Howbridge's nephew in May 1883.  Howbridge wrote the note to document that he had received this old manuscript as a gift from Arif Bey, a Muslim with whom he had studied Turkish in Erzurum.  While it is impossible to gauge the extent of Howbridge’s interactions with Turks, Armenians, Arabs, or Greeks, whether they were Muslims, Christians, or Jews, during his years in Anatolia, it is salient that the Christian missionary cherished the Quran manuscript which he had received from his Muslim teacher.  The manuscript itself is an important reminder that in the mid-nineteenth century, Muslims in Anatolia did not follow the conservative teaching that only Muslims in the state of ritual purity be allowed to touch a Quran, whether it is handwritten or printed.