The Newspaper World > Rivalry with Hearst

Typed Memorandum of Agreement as discussed by Mr. Seitz and Mr. Carvalho

For a brief time in 1899, following their success in the settlement of the newsboys’ strike, Pulitzer and Hearst considered something of a peace treaty in the price wars that had begun with Hearst’s takeover of the Journal in 1895. This would be called price fixing today, as documented by this memo. In addition, clause 9 stated that “neither of the parties to this agreement shall endeavor to take away the employees of any other of the parties to this agreement by offering higher salaries or special inducements,” something that Hearst had been doing on a regular basis, including hiring Carvalho away from the World. 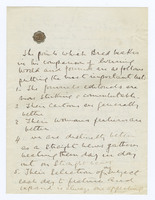 Autograph Memorandum comparing The Journal and The Evening World

Ralph Pulitzer, eldest of the children, had started working at the World after graduating from Harvard. In this undated memo he compares the World with Hearst’s Journal on a variety of points: that their “editorials are more striking & commentable,” their “cartoons are generally better,” and last and most important, that they are able to condense their features and regular stories more than the World, “with sometimes two pages less.” 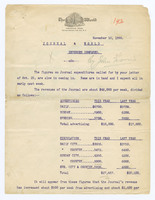 In this memo business manager John Norris lays out where the circulation battle between the World and the Journal stood in November, 1898, with good news for Pulitzer. 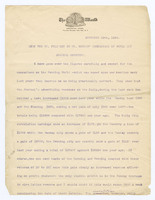