In this cartoon from Harper’s Weekly, Joseph Pulitzer is depicted as the drum major leading representatives of all the major newspapers of the day, with William Randolph Hearst playing a hurdy-gurdy in the center rear. “Tom” is Democratic National Committee Chairman Thomas Taggart, and his dream is that the newspapers would all endorse his candidate for president, Alton B. Parker, seen here standing on his own front porch. Most, but certainly not the World, endorsed the Republican incumbent Theodore Roosevelt. Hearst had lost the Democratic nomination to Parker. The ship on the horizon is “Sagsomemore,” in mockery of TR’s New York estate, Sagamore Hill.

Earlier in his career, with the election of Grover Cleveland to the presidency, Joseph Pulitzer was elected to Congress from New York in 1884. When he arrived in Washington in early February, 1885 he found that the job ill suited him, asking a fellow Congressman, “Have I got to stay in this place two years?” By April of 1886, he had resigned, giving his salary to endow a hospital bed for newspapermen. This left his district with no representation in Congress and no access to government appointments. 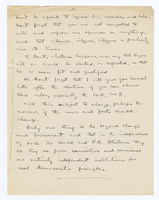 Manuscript copy of memo on editorial view regarding 1908 elections

In this remarkable 10-point document, Pulitzer gave orders to his editors regarding the 1908 Presidential election, beginning “Don’t commit the paper for Bryan unless you hear from me.” Continuing “Don’t cease vigorous opposition to [Theodore] Rooseveltism in all phases; ditto Republicanism wherever wrong.” And ending “Only one thing to be beyond change and permanent and that is the independence of both the World and P[ost] D[ispatch]. Whatever they do they do from conviction and conscience as entirely independent institutions for real Democratic principles.” 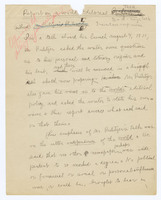 Manuscript Report on a World Editorial Talk [by Joseph Pulitzer]

Under the subheading “Mr. Pulitzer’s Philosophy,” Clark Firestone, then recently hired away from the Evening Mail, took these notes on the World’s editorial policy. Pulitzer emphasized first, the independence of his newspaper, second, that it should be readable, and third, that it should employ humor, and especially irony