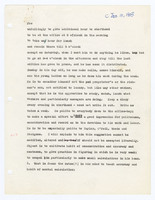 Louis Morris Starr (1917-1980), professor of journalism at Columbia and director of the Oral History Research Office, planned to write a major biography of Pulitzer. In addition to assembling photocopies of documents, and taking notes on the papers at Columbia and elsewhere, Starr created transcripts of Pulitzer’s Pitman shorthand notebooks that have been of use to James McGrath Morris and other researchers. Shown here is a selection from January 10, 1903.

In the "Foreword" to his biography of Joseph Pulitzer, Don C. Seitz describes himself as "being the one person remaining with The World who had the longest association -- eighteen years -- with its owner." He acknowledges the use of material collected for this purpose by George W. Hosmer, M.D., who had served for twenty years as Pulitzer's live-in physician, and who had retired from this service in 1909, and died two and a half years after Pulitzer, in June of 1914. Dr. Hosmer had sent Pulitzer a short sketch of a longer work that he had already completed, to which Pulitzer replied in part: "I hate the idea of passing away known only as the proprietor of the paper. Not property but politics was my passion, and not politics even in general, selfish sense, but politics in the sense of liberty and freedom and ideals of justice."

Seitz writes in his "Foreword:" "I have ventured to name him on the sub-title page as the Liberator of Journalism. I do not mean by this that he freed the press from any thrall not of its own making. In the graet measure, American newspapers were organs of party or owners. They did not act freely, open to any cause. Mr. Pulitzer's belief that the paper was a public servant, bound by no other considerations than its duty to the community, and above any deference, even to its readers, came as a new and welcome doctrine, first to the public and at last to the press itself. He would not pander, he would not compromise and he made himself heard!

Seitz continues: "For all but four of his twenty-eight years' proprietorship of The World, Mr. Pulitzer was an invalid and for most of the time, blind. The elimination of sight was not toal, but the vision allowed him was so dim that it served as a greater strain and irritation than if he had been wholly in gloom. In bright light he saw nothing. When the sky was gray, or at early twilight he could percieve surroundings, but never the printed page, except for a time, headlines. He had long ceased to try reading these. One eye, the right, was totally eclipsed by the detachment of its retina, the other suffered from a suffusion that completed the disaster."

And adding: "To me he seemed to have lived always, so wide was his knowledge, so deep his understanding, so swift his comprehension. Indeed, there was something uncanny in the certainty with which this man, sitting in darkness, could grasp events and discern motives."

Pulitzer: A Life in Politics, Print, and Power


James McGrath Morris's first biography, The Rose Man of Sing Sing: A True Tale of Life, Murder, and Redemption in the Age of Yellow Journalism (Fordham University Press, 2003), told the story of Charles E. Chapin, City Editor of Joseph Pulitzer's New York Evening World. This led Morris to work on Pulitzer himself, and he spent many weeks over many months in Columbia's Rare Book and Manuscript Library Reading Room examining the materials in the RBML's Pulitzer Papers and World Papers.