By the spring of 1885, Pulitzer was showing signs of exhaustion. John A. Dillon, Pulitzer’s former co-owner of the St. Louis Post-Dispatch, wrote to his old friend: “I am sorry to hear of your insomnia. Will you allow me to prescribe for you? You are suffering from something worse than mere overwork. Overwork in business or in routine work will break a man down but in your case the injury is greater because you have been overworking those powers and faculties which stand the highest. I mean simply the creative mental power, that faculty which in man is the type of the higher or divine creative power. Not one man in ten thousand has it at all,” adding that it “is a faculty which you possess to a rare degree.” In closing he wrote: “If you wish you can do the work of a lifetime in five years – and break down; or you can do the work of a century in a life time, and live while you do it, which is much better.” 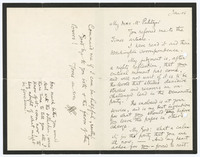 Pulitzer’s doctors prescribed rest in California, but for him it was like being sent into exile. In this letter given to Kate as they left New York by private railcar, former proprietor and editor of the World, Manton Marble wrote: “May I beg of you to read the next page of this note to Samson Agonistes now, without delay…” and writing to Joseph: “My God! What a calamity for the party that you are ill now.—And my heart aches for you – forced to rest.” President Grover Cleveland was seeking reelection, but Pulitzer felt rejected by Cleveland, having championed him four year before. Republican candidate Benjamin Harrison won in November.

This badly burned letter and envelope was probably rescued from the 1900 fire at the Pulitzers’ house on East 55th Street. Written by Dr. S. Weir Mitchell of Philadelphia, then the nation’s leading neurologist, it addresses Kate’s own health in respect to her husband’s condition.

Mitchell, who had pioneered research on the relationship between eyestrain and headaches, had prescribed the “Weir Mitchell treatment” for Joseph in the fall of 1890, but it turned out to be similar to a long list of earlier treatments, including prolonged bed rest and massages. On the other hand, hearing it from Mitchell convinced Pulitzer that there was no other recourse for his near-blindness.

On October 16, 1890, a startling announcement had appeared in the World: “Yielding to the advice of his physicians, Mr. Joseph Pulitzer has withdrawn entirely from the editorship of the World.” The newspaper would be controlled by an executive board of his long-time editors. 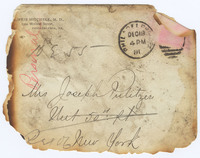