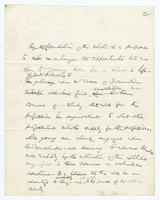 Draft agreement with Columbia University to endow the School of Journalism

This draft agreement was written out by George W. Hosmer, Pulitzer’s long-time secretary, and it was Hosmer who made the initial contact with President Butler. Sixteen pages long, using clippings from printed text pasted on some of the pages, Hosmer wrote above his initials on the final page: “Suggested draft for news statement.” Don C. Seitz who was then running the World, thought that Pulitzer should endow the newspaper, but Pulitzer was determined to found a school.

Signing herself “V. Jefferson Davis,” Varina Davis, first lady of the Confederate States of America, wife of President Jefferson Davis, and a cousin of Kate Pulitzer, writing in honor of the 25th anniversary of the St. Louis Post-Dispatch, here discusses at some length Pulitzer’s plans for the School of Journalism at Columbia. Most everyone else around the country rejoiced. President Theodore Roosevelt, his arch-enemy, wrote to magazine editor Robert Underwood Johnson: “I share your indignation at Columbia College having accepted such money for such a purpose from such a knave.” 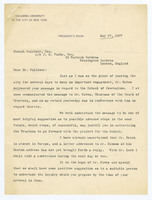 By the early 1890s, Pulitzer began to consider the possibility of founding a school of journalism as a way to gain respect for journalism as a profession and to see that his weath was put to good use beyond his own lifetime. One of those with whom he discussed this idea was Seth Low, then president of what was called Columbia College. The Columbia trustees rejected the idea, but in 1903, when Pulitzer resurrected his proposal under President Nicholas Murray Butler, they accepted.

Pulitzer selected Columbia because of its location in the capital of newspaper publishing and because it already had a School of Mines, asking “Why not also have a School of Journalism?” He offered $2 million to build a building that would be dedicated to Lucille, his favorite child who had died of typhoid fever on New Year's eve, 1897. The remaining money was to be invested, with the income used to pay instructors and to award annual prizes in journalism.

President Butler met his match in Pulitzer, however, and while keeping all contacts between them cordially respectful, negotiations were not completed until after Pulitzer’s death.

The Profession of Journalism, Accuracy in the News, An Address Before the Pulitzer School of Journalism, Columbia University, New York, Delivered at Earl Hall, December 16, 1912

First-born of Kate and Joseph Pulitzer’s children, Ralph took over control of the World after his father’s death in 1911. In this address to what was then being called the Pulitzer School of Journalism, he called upon the school’s students to “regard newspaper work not as a trade but as a solemn trust … trained not only in the technique but in the highest traditions of their life’s work.” 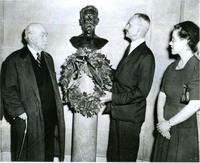 Photograph of the Dedication of the Columbia School of Journalism

This photograph shows President Nicholas Murray Butler, on the left, with the bust of Pulitzer sculpted by August Rodin in the middle.