After resigning from the House of Representatives, Pulitzer donated his salary of $5,000 to endow a bed in Roosevelt Hospital for the use of sick or disabled newspaper workers. Beneficiaries were to be chosen by the President and Board of Trustees of the New York Press Club, or by Pulitzer himself.

Draft of manuscript letter, with corrections, to Alexander S. Webb 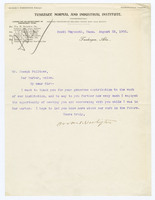 In this letter Booker T. Washington acknowledges Pulitzer’s on-going donations to the Tuskegee Institute, and mentions his recent visit to see Pulitzer at Chatwold in Bar Harbor.

Following the death of his daughter Lucille in 1897, Pulitzer contacted text-book publisher George Arthur Plimpton, then also serving as Treasurer of Barnard College, offering to donate $10,000, changed here to $15,000, to set up two scholarships at Barnard as a memorial to her. 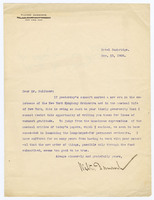 In this letter conductor and composer Walter Damrosch acknowledges Pulitzer’s donation to the Philharmonic Society, now known as the New York Philharmonic. 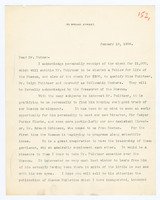 This letter acknowledges Pulitzer’s donation of $1,000 for himself to become a Fellow for Life of the Metropolitan Museum. His additional donation of $300 allowed Miss Pulitzer, Ralph Pulitzer and Alfred Butes, an Englishman who had become Pulitzer’s secretary in 1896, to become Fellowship Members.