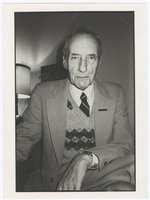 According to the photographer, Victor Bockris, this portrait of Burroughs was taken at a dinner party given by Bockris and Barry Miles for Burroughs and Andy Warhol in Suite 222 at the Chelsea Hotel, October 1980. The dinner was filmed by the B.B.C. for their Chelsea Hotel documentary. Bockris recalls, “This is one of the few portraits I took of Bill where he has the ghost of a smile on his lips. The small pin on the lapel of his jacket says Head Boy (as in boarding school). I gave Andy one which said Vice Head Boy. This was the final of three dinners I gave for Andy and Bill in 1980 and the one at which Andy said quite emotionally that he would miss Bill if he moved to Kansas.”  Burroughs left New York for Lawrence, Kansas at the end of 1981 where he spent the rest of his life.