The first edition of Burroughs’s first book, Junkie: Confessions of an Unredeemed Drug Addict (1953), was published under the pseudonym William Lee.  It was issued by Ace Books publisher A.A. Wyn in a dos-à-dos binding with The Narcotic Agent by Maurice Helbrant, a former agent in the Federal Bureau of Narcotics—Burroughs wrote to Ginsberg in July 1953 (see the letter in the next case) that Helbrant’s book was “not so bad as I expected it would be.”  Appearing in April 1953, Junkie sold more than 100,000 copies by the end of the year.  The book differed from Burroughs’s manuscript in several ways—including bowdlerization of certain phrases, the addition of numbered chapters, and various editorial interjections regarding the narrative’s accuracy about drug use and addiction.

The companion title, bound dos-à-dos with Junkie. The author, Maurice Helbrant, worked for the FBI for many years.

Junkie was reprinted numerous times between 1957 and 1973, in the US, England, and France, but Ace Books failed to properly compensate Burroughs, and in the mid-1970s he won a breach of contract suit against the publisher, thereby opening the door in 1977 for a revised edition, published by Penguin.  In spite of Burroughs’s efforts to have the revised edition of his first book issued with its original title “Junk,” Penguin published it with the new title, Junky (see Burroughs letter to Peter Matson in this case).  The changes between Junkie and Junky include a new introduction by Allen Ginsberg, removal of the Ace chapter divisions in favor of continuous text, the editorial notes were cut as were the bowdlerizations, and almost 4,000 words previously unused from Burroughs’s manuscripts were added.

The Columbia copy is inscribed by Burroughs to his friend and occasional collaborator Steven Lowe (1949-2007).

Edited by Oliver Harris, the definitive version of Junky was published in 2003 for the 50th anniversary of its original publication.  Harris’s introduction discusses the historical background of the book’s composition and includes a comprehensive appendix documenting earlier editions. 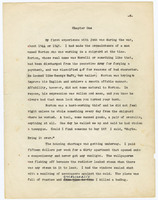 The opening page of Junkie from the typescript used for the 1953 first and subsequent editions of the novel.  Burroughs began work on the original manuscript in 1950, producing a first draft of the book in early 1951. 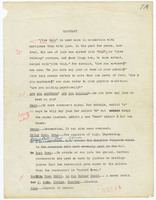 The glossary Burroughs provided offered the uninitiated reader provides a decoder for the street slang and drug argot that characterizes Junkie’s prose.  It appears at the front of the first edition, but is moved toward the back of the book in subsequent editions.  The leaf included here bears Burroughs’s corrections and additional terms.