First published in Paris, July 1959, as The Naked Lunch in the Olympia Press Traveller’s Companion Series—other titles in the series include Samuel Beckett’s Molloy (1955), Henry Miller’s Quiet Days in Clichy (1956), and Vladimir Nabokov’s Lolita (1955), as well as other lesser know works like School for Sin (1955), Tender was my Flesh (1955), and The Whip Angels.  Olympia publisher Maurice Girodias had initially turned down Naked Lunch, but changed his mind when parts of the book began appearing in literary journals such as the Chicago Review, Big Table, and Yūgen.  The dustjacket of Naked Lunch, shown here, was designed by Burroughs himself.

The Olympia Press Traveller’s Companion Series was easily recognizable for its green paper wrappers—shown here is the cover of Columbia's copy of Naked Lunch (the dustjacket is shown above).

The text of the first American edition of Naked Lunch differs from the original Olympia Press edition in that editor Irving Rosenthal, with Ginsberg’s assistance, added some material from the “Interzone” manuscript that had been left out of the original Olympia version.  The Grove Press edition also includes Burroughs’s “Letter from a Master Addict to Dangerous Drugs,” originally published in The British Journal of Addiction, January 1957, and incorporated in numerous footnotes in the Olympia edition.  The Grove edition was printed and bound in 1961, but Grove publisher Barney Rosset waited until his court battle over the censorship of Henry Miller’s Tropic of Cancer had finished (in Grove’s favor) before going forward with another book that would stir public controversy.

Grove issued this prospectus at the time of publication as a means of advertising and promoting Naked Lunch.  Norman Mailer wrote, “I think that William Burroughs is the only American novelist living today who may conceivably be possessed of genius.”  Mailer met, and liked, Burroughs at an Edinburgh literary conference organized by Burroughs’s British publisher John Calder in August 1962.  Also participating were Henry Miller and Mary McCarthy, both of whom admired Burroughs. 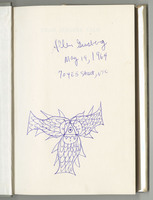 According to the publisher’s blurb on the dustjacket, Dead Fingers Talk is not a book of selections but a new novel constructed out of … three earlier books” The Naked Lunch (1959), The Soft Machine (1961), and The Ticket That Exploded (1962), all by the Olympia Press, Paris.  The complete version of Naked Lunch would be first published in England the following year (1964), also by Calder.  Columbia’s copy comes from the library of Allen Ginsberg.

The first American paperback edition of Naked Lunch appeared with Mailer’s blurb blazed across the cover in violet typeface.  Just as Grove publisher Barney Rosset has predicted, Naked Lunch was challenged as an obscene work.  The edition also included a transcript of the Massachusetts court decision, declaring on July 7, 1966 that Naked Lunch was not obscene.

In 1964, Gallimard brought out the first French translation of William S. Burroughs’s Naked Lunch under the title Le Festin Nu. The book first appeared in Paris in its original English form in 1959, in the Olympia Press Traveller’s Companion series (seen above). France traditionally had been a friendly place for many controversial English language writers of the twentieth century: James Joyce (Ulysses, 1922), Henry Miller (Tropic of Cancer, 1934), and Vladimir Nabokov (Lolita, 1959) all published books that were either banned or considered unprintable in Great Britain or the United States. 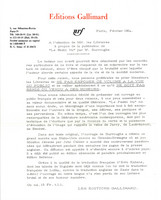 This letter to booksellers from its publishser was issued with the first French edition, shown above. In the letter Les Editions Gallimard warns booksellers that unsuspecting readers might be disoriented by the book’s particular characters and risk shocking misunderstandings over the sometimes brutal descriptions made by the author on certain aspects of modern society. Booksellers are further advised not to expose the book to public view and under no circumstances to sell the book to minors. One might ask, is this conservationism necessary in a country with a such a strong track record for literary tolerance? About a year before Le Festin Nu appeared in France, a Boston bookseller was arrested in January 1963, and charged with obscenity for selling the first American edition of Naked Lunch (Grove Press, 1962, above)--the book would not be cleared of that charge until July 1966, so perhaps Gallimard’s caution over this particular text was warranted.