The 1958 appearance of a Naked Lunch excerpt in the Chicago Review created a scandal that ended in the resignation of the magazine’s two editors, Irving Rosenthal and Paul Carroll.  The controversy was initiated when an editorial review by Chicago Daily News columnist Jack Mabley, appeared under the title “Filthy Writing on the Midway.”  Mabley objected to what he called “obscene” writing in the University of Chicago’s literary magazine.  Published alongside Burroughs in the Chicago Review were Lawrence Ferlinghetti, Allen Ginsberg, Jack Kerouac, and other young and unconventional writers of the period.

Edited by LeRoi Jones and Hettie Cohen, Yūgen was another Little Magazine publishing new and experimental writing.  Jones, today known as Amiri Baraka, was also an editor at Kulchur magazine, where many of the Beat writers found early publication.  The manuscript of this text also appears in the exhibition. 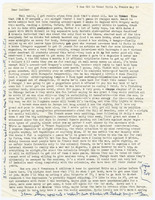 Written from Paris, Ginsberg’s letter to Lucien Carr recounts various starving-poet-in-London adventures, as well as details about Burroughs: “He’s finishing another book [Naked Lunch], picaresque novel, about 250 pages, very good, a chapter of it was in Chicago Review & they wrote him a fan letter saying he was great & they would publish all he wrote if no one else will--…”

When Rosenthal and Carroll left the Chicago Review, they took Burroughs writings, as well as those of Kerouac and Ginsberg, with them to form Big Table.  The magazine only ran for five issues, but in its pages appeared excepts from works by Burroughs, Ferlinghetti, Ginsberg, Kerouac, as well as John Ashbery, Paul Bowles, Robert Creeley, Frank O’Hara, Gary Snyder, and many others.

In the late 1970s the publisher and bookseller Bradford Morrow discovered a variant excerpt from Naked Lunch and published it, with Burroughs’s consent and collaboration, as Doctor Benway : a passage from Naked Lunch. 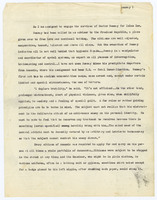 Exhibited alongside the published book is a page from the Benway section of the “Interzone” manuscript.  Columbia’s manuscript correlates to Morrow’s publication, but it is a carbon copy, suggesting that the manuscript fragment discovered by Morrow was the typescript original.  The Benway section was cut down by Burroughs and only parts of it were used in Naked Lunch.