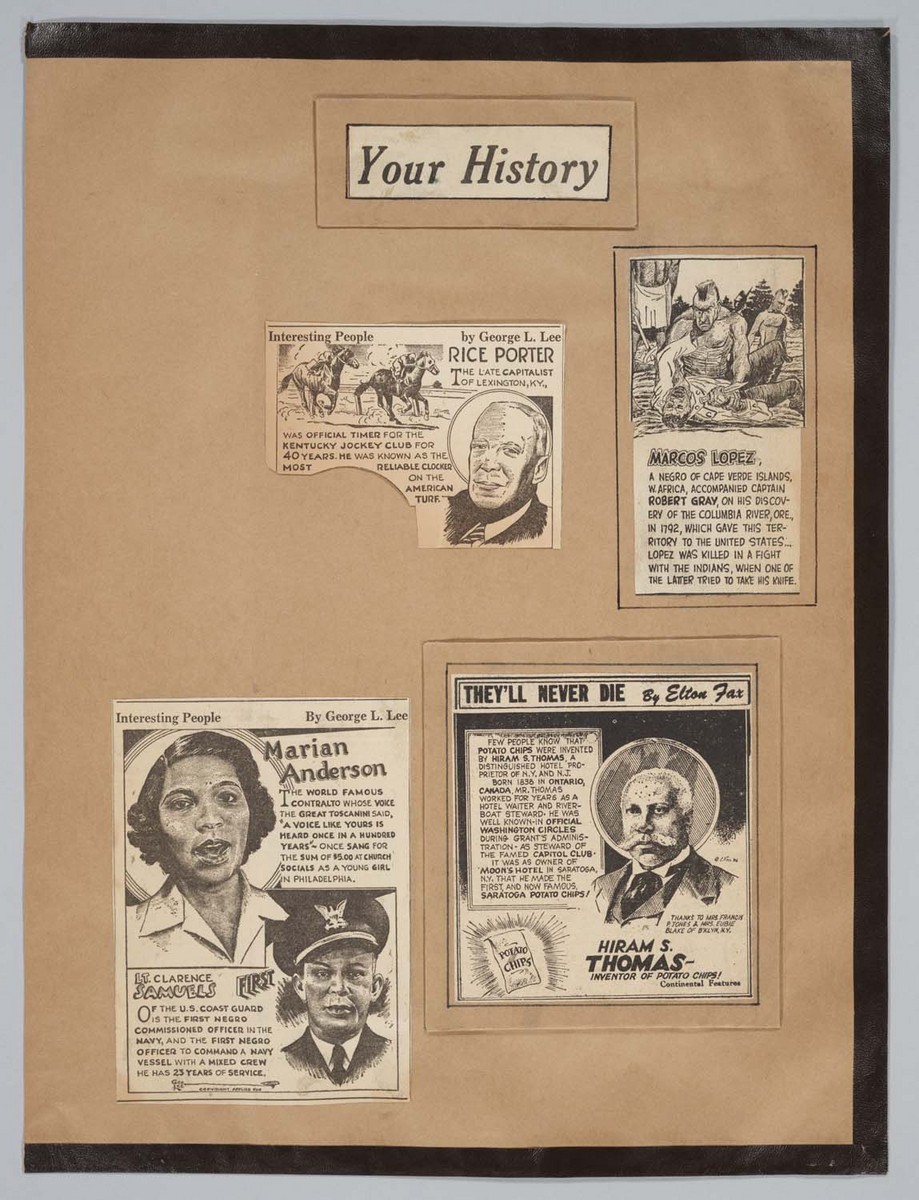 Pictured at right:
A page from Gumby's scrapbook,
"They Broke Through Discrimination."
See: "Your History" for more information.

Alexander Gumby was not the only person of his era interested in preserving and disseminating the documentary history of African Americans. Yet he can be ranked among a core group of contemporaries in the early twentieth century who stood at the leading edge of what was still a relatively circumscribed movement to do so. Gumby was an acquaintance of Arthur Schomburg, for example, whose collection of nearly 4,000 rare books and other publications (along with still more manuscripts and artwork) related to black people around the world became the basis for the present-day Schomburg Center for Research in Black Culture when he sold it to the New York Public Library in 1926. Gumby also no doubt drew inspiration from historian Carter G. Woodson, one of the first academics to write about African-American history and the originator of the Negro History Week celebrations in the 1920s. Journalists like J.A. Rogers and his contemporary contributors to the black-owned newspapers that reached the height of their influence in the 1920s and 1930s ensured that the history preserved by people like Gumby and Schomburg and organized by scholars like Woodson reached a popular audience at regular intervals.

Woodson argued in a 1929 letter (a copy of which Gumby saved) that "nothing can be more of a stimulus to the race than to enable it to get inspiration from its past record." Such a sentiment clearly motivated Gumby and his peers to pursue their varied but similar projects. Yet this cohort was also bound by a desire to avoid limiting their potential audience to African Americans. As Woodson continued, "the effort [also] convinces the enemies of this despised group that history does not show much more of actual contribution to civilization to the credit of one race than it does to the other." The message was clear: far from attempting to uncover and disseminate an African-American history distinct from any other, Gumby and his peers set out to reveal an American and world history that included people of African descent. As Woodson's language of "enemies" made clear, such a viewpoint was a political statement in and of itself.

Noting this context helps to reveal Gumby's motivation and intent. It also explains an apparent curiosity of the scrapbooks that came to be known as the Alexander Gumby Collection of Negroiana. Although Gumby and others often referred to his "Negro collection," this term designated a more or less coherent subset of his larger scrapbook project rather than a separate pursuit. As Gumby explained, he only started to group the so-called "Negro items" in their own volumes after he realized that his documentation of other subjects like the New York theater world had uncovered enough of these overlooked pieces to warrant special attention. So despite its frequent portrayal as a collection devoted solely to "Negro History," the volumes of Gumby's life's work that gained greatest notice go beyond the narrow scope such a term implies. This is evident in the fact that Gumby often documented the ways that people of African descent fit into the broader sweep of history--during events like the Civil War or among the great scientific minds of the country, for example. In other instances, Gumby's general interest in a subject like boxing led him to compile a volume devoted to "White Fighters" that could be read alongside his collection of material related to "Negro" ones. As a private collector, Gumby merely followed his interests; in retrospect, this concept of heterogeneity is one of the most important elements that Gumby preserved. It marked him as typical of a increasingly influential strain of comment on African-American history and life during the first half of the twentieth century. Several examples of similar figures are apparent in the pages that follow, suggesting Gumby's awareness of this broader context.