Approaches to Islam in the Age of Empire > Universal History 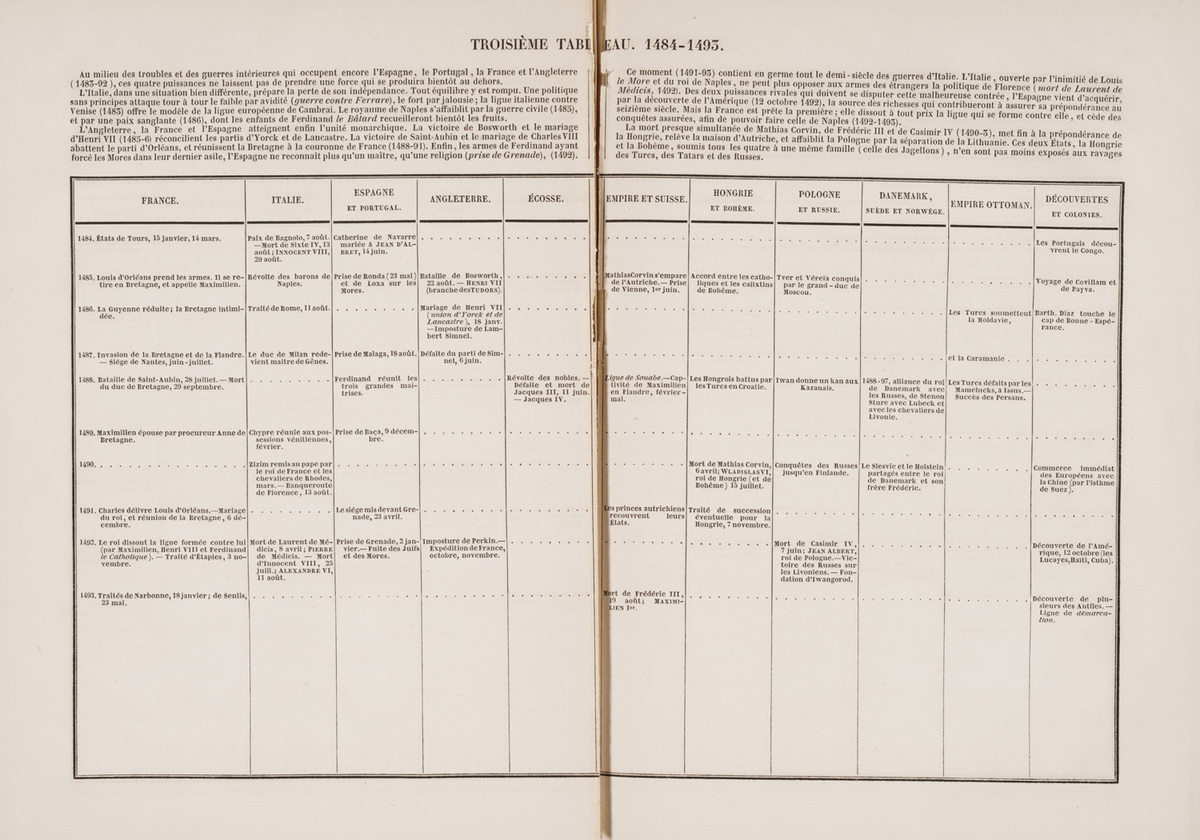 Jules Michelet (1798-1874) was the premier French historian of the nineteenth century, and teaching materials, which he had prepared for French public schools, carried an enormous prestige.  This supplement to a history textbook stands at the end of the exhibition, because it raises the important question when France and Britain acquired their imperialist attitudes towards Muslim societies in the Middle East and South Asia.

Michelet compiled the first version of these tables in the mid-1820s.  From his French perspective, modern history comprised the period between the Ottoman conquest of Constantinople in 1453 and the end of the Thirty Years’ War in 1648 so that the more recent French history, in particular the French Revolution, the Napoleonic Wars, and the reconstitution of the Bourbon monarchy after 1815, did not need to be included.  The arrangement of the country columns illustrates that the world begins in France (the first column on the left) and ends in the newly discovered territories and colonies (the last column on the right).  But the Ottoman Empire belonged to the sphere of European history, even though Turkey - like the Scandinavian countries or Russia and Poland - lies at the margins of Europe, and events of Iranian history are also listed in this column.  The country distribution in the other columns, however, indicates that geography, and not political alliances, determined which countries Michelet combined in a column.  This geographical arrangement suggests also that Michelet was not particularly concerned with the emerging nationalist sentiments in Scandinavia and eastern Europe.

The fourth table presents the major events between 1493 and 1501.  With regard to Ottoman history, Michelet mentioned military engagements in Moldavia and Egypt, as well as conflicts with Venice.  Then he used brackets for Iranian history to conclude the decade with the assumption of Shāh Ismāʿīl (r. 1501-1524) to power.  The beginning of Safavid rule in Iran was accompanied by the establishment of a Shiʿite state, and the event is relevant to a Eurocentric world history because the subsequent military conflicts between the Sunnite Ottomans and the Shiʿite Safavids in southern Iraq put a considerable strain on the Ottoman armies engaged in southeastern Europe.