Among Plimpton’s other collecting interests was the history of slavery, and this account book is part of that small collection. As he describes in his introductory text, published along with a photo facsimile of the journal by the American Antiquarian Society in 1930, “The diary was purchased at auction in New York, together with an account book of the South Carolina plantations of Oak Lawn and Sandy Knowe from October 1853 to October 1854. The presumption is that the author of the diary was a South Carolinian who made this trip to Africa and that it lay in the desk drawer with the plantation accounts and was forgotten.” The chart shown here lists the purchase details for 33 slaves, including men, women, boys, and girls.

“Slavery is as old as mankind…” [Introduction]

This text appeared as the introduction to the facsimile of the John Johnston account book, published by the American Antiquarian Society in 1930. 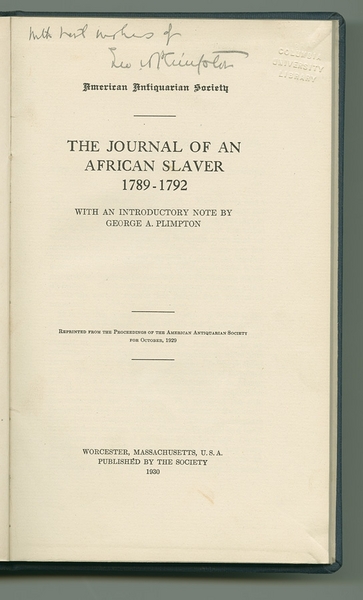 The Journal of an African Slaver, 1789-1792, with an Introductory Note by George A. Plimpton