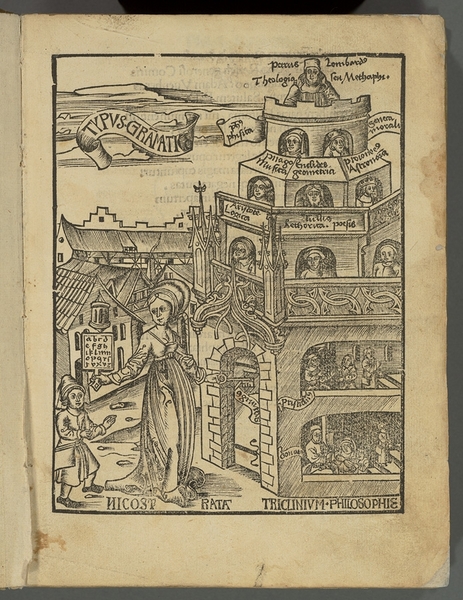 This is the first edition of one of George Arthur Plimpton’s favorite books, containing his favorite woodcut, “The Tower of Knowledge,” that he used to describe his collection of “our tools of learning.”

His son, Francis T. P. Plimpton, described it as showing “a somewhat apprehensive child being presented with a hornbook (to learn his letters) by a stern medieval lady teacher, designated Nicostratae … who is unlocking the Tower with a large key marked congruitas (the way to wisdom). Picture-windows on the first two floors disclose benched pupils (triclinium philosophie, the banquet of philosophy) listening to Donatus (ca. 333), grammarian and teacher of St. Jerome, and, above, Priscian (ca. 500) …

“From windows in the three upper floors gaze the stolid visages of logician Aristotle, rhetorician Cicero (“Tully”), arithmetician Boethius, musician Pythagoras, geometrician Euclid, astronomer Ptolomy, natural philosopher Pliny, and moral philosopher Seneca – all of whom personify the trivium and quadrivium of the medieval educational discipline. Peering over the crenellated battlements of the topmost turret is theologian and metaphysician Peter Lombard, who died in 1160.”