Priscilla Lewis was to become the mother of George Arthur Plimpton, and this album of her work has pride of place in this exhibition. Apparently, Lewis had access to a copy of Gould’s Penmanship, also included here, as plates in his work inspire a number of her pages. For some of her compositions, Lewis took only the text and general layout, substituting different scripts and adding ornaments. Other pages copy Gould more closely. Clearly, Lewis achieved a command of hand somewhat unusual for a fourteen-year-old. She went on to Wheaton College in Norton, Massachusetts, taught school at South Walpole, and married Calvin G. Plimpton in 1840. The couple would have nine children, six boys and three girls. Lewis Farm in Walpole, Massachusetts was her family homestead. 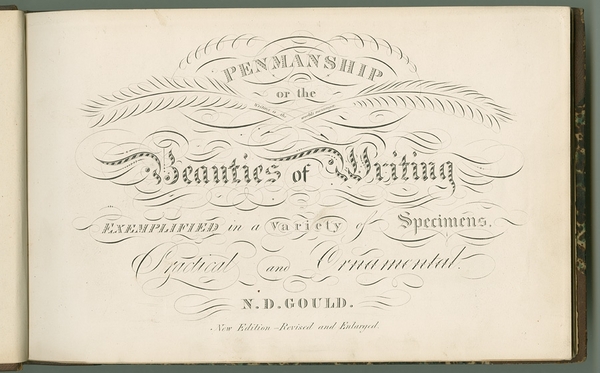 Penmanship, or the Beauties of Writing Exemplified in a Variety of Specimens, Practical and Ornamental. [3rd edition]

Although Gould was a distinguished teacher of penmanship in New Hampshire, Boston, and New York, his preference for elegance rather than “pen-driving” lessened his influence. Gould taught and wrote extensively on music as well as on penmanship.