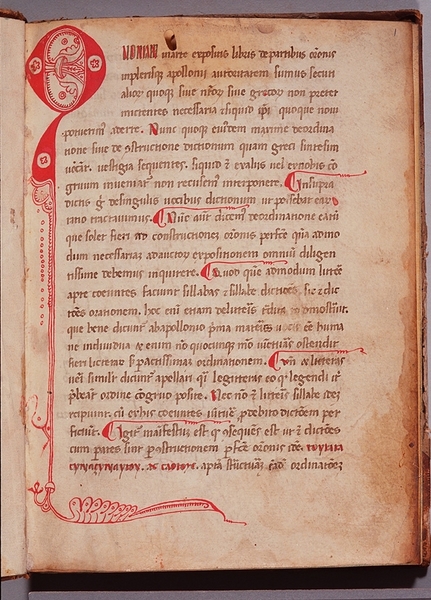 Priscian is considered the best known of all the Latin grammarians. He was the author of the Institutiones grammaticae, (“Grammatical foundations”), containing 18 books. It had a profound influence on the teaching of Latin and of grammar generally in Europe from the 7th century through the medieval period. About 1,000 manuscript copies of Priscian are known, most containing books 1 to 16 (Pricianus major), but a few, including this one, contain books 17 and 18 (Pricianus minor). 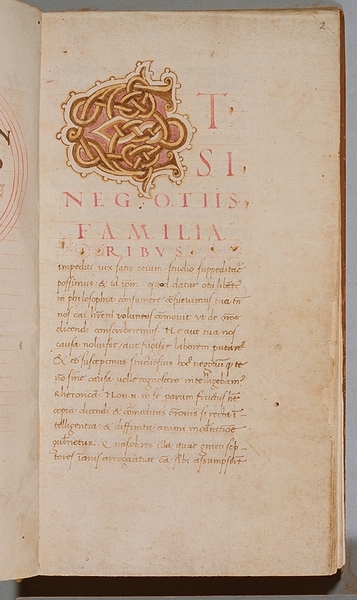 In terms of its content, the anonymous Rhetorica ad Herennium is similar to Cicero’s youthful treatise on rhetoric, the De inventione; hence authorship by Cicero was attributed to the free-standing Ad Herennium from the 5th until the very end of the 15th century. It has been suggested that the Ad Herennium was never a “text” in its own right, but a set of lecture notes taken by a student, possibly in Rhodes. The reason for its popularity is clear, however: it is simple, practical, and has many examples.

This copy was produced by the scribe, Felice Feliciano (1433-1479), who was also a goldsmith, an antiquary, a poet, a printer (with certainty, of only one edition of Petrarch), and a binder. He was also a passionate alchemist if we are to believe certain sonnets, letters and drawings of his. His own brother threw accusations at him: “imitator of difficult things, alchemist, consummer of time and of money in vain and fallacious matters.” Rather endearlingly, Felice seems never to have had the hubris to expect the conversion of base metals into gold; he merely strove for silver. This manuscript was owned by Sir Thomas Phillipps (1792-1872). 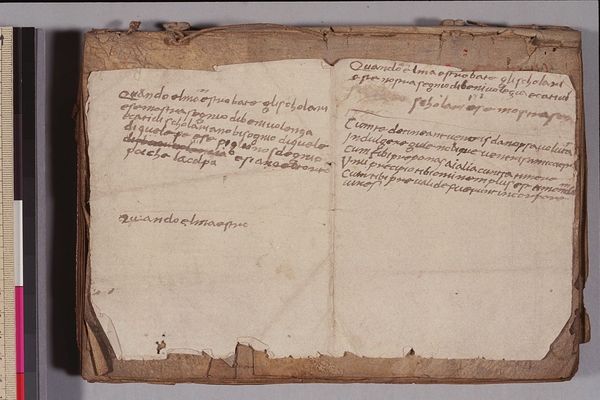 ‘Quando el maestro bate gli scholari, e’ se mostra segnio di benevolenza, e cativi scholari ano bisognio di quele di quel [sic, twice] pe e se pigliano sdegnio [large erasure] e’ siano a torto poiche la colpa . . .’ ‘When the teacher beats the students, he shows them a gesture of good will, and the bad students need these beatings, and if they are angered by the beatings, they’re wrong because the fault . . .’ “And you’ll write this out three times and then you’ll write the Latin phrase three times, and I never want to hear you whining again!”

We invent this last quotation; it isn’t on the leaf, but we can imagine hearing it: the insistence on the benevolence of the beatings, the recopying and recopying of the phrase, and the poor handwriting bring to mind a crying child and a teacher brandishing a ruler. The book that has hosted this scrap of paper, perhaps for 500 years, is a beginner’s Latin grammar copied cheaply on second-hand parchment. The classroom is before our eyes. 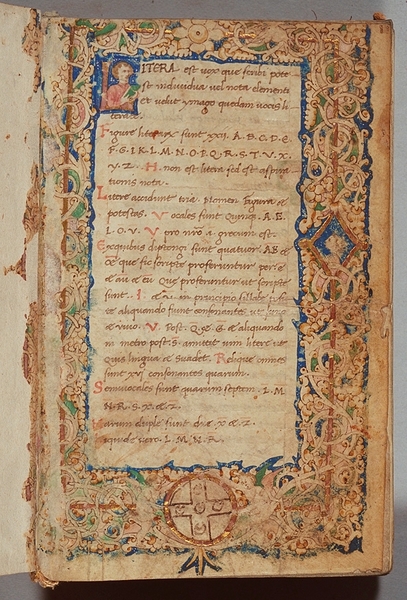 Manuscript book on parchment Florence, Italy, in or after 1467

This manuscript contains several Latin grammars, from the elementary text by Donatus to the more complex treatise on Latin prosody by Guarino Veronese. It was copied by three scribes, none of whom signed their names; however, the handwriting of one has been recognized by Dr. A. C. de la Mare as that of Giorgio Antonio Vespucci.

Giorgio Antonio Vespucci, Dominican friar and member of a well-placed Florentine merchant family, was the founder of a school, and—more famously to Americans—he was the uncle of Amerigo Vespucci who gave his name to our continent. The young Amerigo studied at his uncle’s school and accompanied his uncle on banking matters to France. This manuscript wouldn’t have belonged to Amerigo, however, who was 16 in 1467, a date that is used within the text as an example for ordinal numbers, “We are in the one thousandth, four hundredth, sixty seventh year of our salvation.” 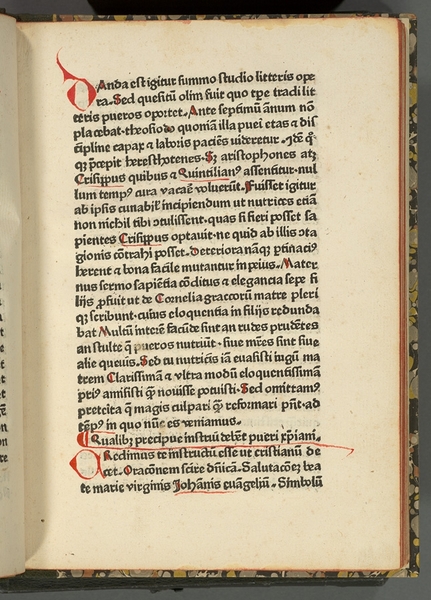 The future pope—in 1450 still simply Enea Silvio Piccolomini—addressed this slim treatise to the 10-year old heir to the throne of Hungary. While the text slots neatly into the literary genre of “Advice to Princes,” Enea Silvio manages his admonitions with a tone of affection and with the commitment to humanistic studies that was characteristic of him. On the left page exhibited here, someone has underlined in red an almost epigrammatic pronouncement to summarize it all: “Sine litteris omnis etas ceca est,” “Without the humanities, any era is blind.” 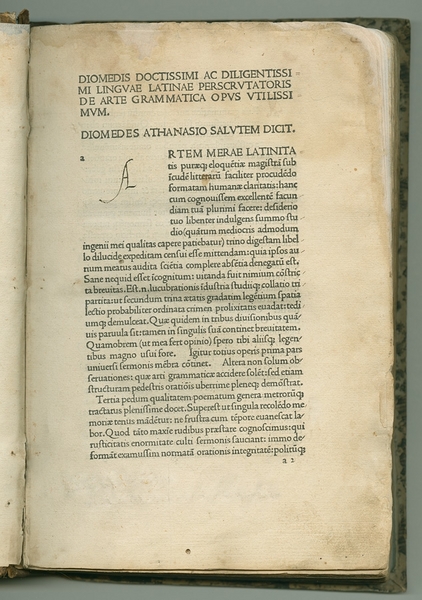 The fourth-century grammarian Diomedes is best known for this work, written in three books: Book I on the eight parts of speech; Book II on grammar and style; and Book III on quantity and meters. This is the first edition of the work, printed by the great Venetian printer, Nicholas Jenson. George Plimpton also owned the second edition, printed in Vicenza in 1476. 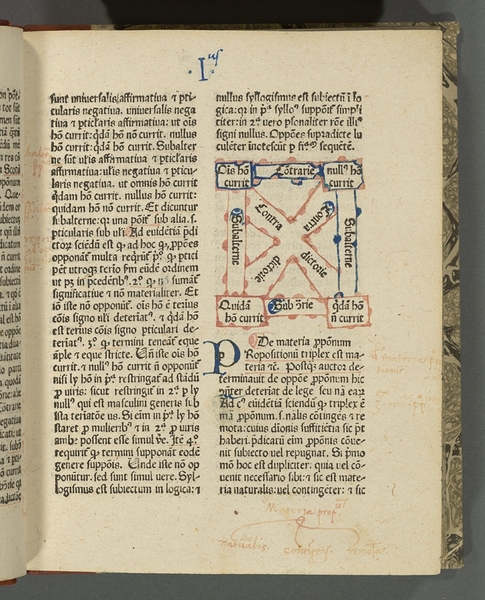 “Hugh of St. Victor at one point in his Didascalion tells the story of a certain wise man who was asked what was necessary to a student, and the wise man therefore answered: a humble mind, a quiet life, silent study, happy poverty, a foreign land, that he should not be ashamed to ask questions, and once he has learned a subject, that he not look down on anyone; the wise man then concluded by saying that four beings carry the throne of Philosophy: Love, Labor, Care and Long Hours.” Thus reads the scroll that an angel displays to a kneeling friar, possibly a student (although, rather carelessly, he has left his book lying on the ground).