This manuscript of Euclid’s Elements contains Books I to V. Dating from the end of the 14th century, it was bound in the 15th century in blind tooled leather over wooden boards. The first leaf contains the figure of Euclid holding a compass, enclosed by an ornamental initial P formed by a dragon coming out of a tube. 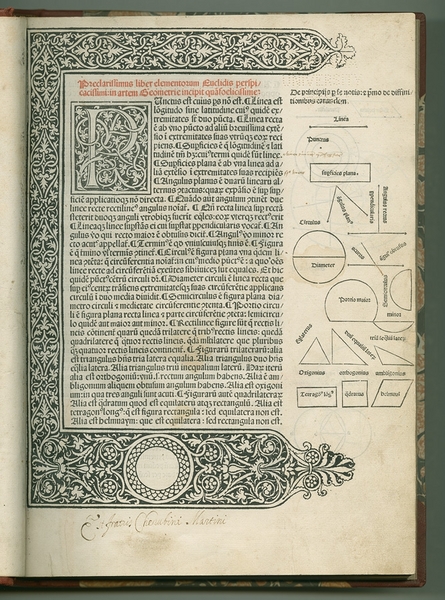 The first printed edition of Euclid’s Elements of Geometry is renowned for the beauty of its printing. It was the first major book to be printed with geometrical figures, placed with care in the text. It provided the model for subsequent printed mathematical books. Divided into 13 books, following the work’s manuscript tradition, it is organized in a system whereby each theorem follows logically from the one before. The Elements remained the basic textbook of geometry for centuries, and over 1,000 printed editions and translations have followed this one. 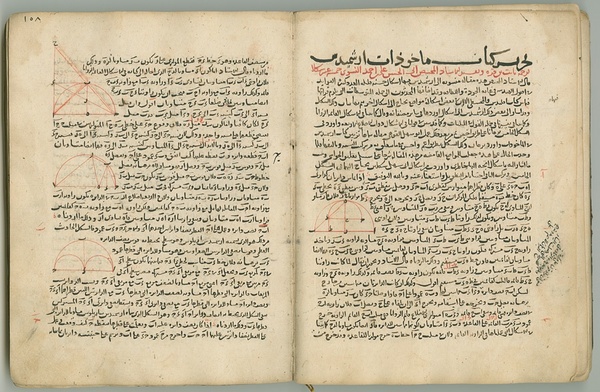 كتاب المتوسطا [The Book of “The Middle Books”]

This miscellany of seventeen mathematical texts plus tables comprises treatises by Euclid, Theodosius, Menelaus, and others. The first Muslim curriculum of science education was established between the eighth and tenth centuries CE in Baghdad, when the Abbasid caliphs actively supported the concerted effort to translate the scientific canon of late Antiquity into Arabic.

The works in this miscellany were studied after Euclid’s Elements and before Ptolemy’s Almagest, and are therefore known as “The Middle Books” (Ar. al-Mutawasssitāt). The codex is opened to the beginning of a geometrical treatise (Ar. Kitāb al-ma’khūdhāt) ascribed to Archimedes. The rubricated heading identifies this text as the revised version (Ar. tahrīr) by the scientist and philosopher Nasīr al-Dīn al-Tūsī (597–672 AH / 1201–1274 CE), based on the translation by the mathematician Thābit b. Qurra (d. 288 AH / 901 CE) and the commentary by Abū al-Hasan cAlī b. Ahmad al-Nasawī (4th cent. AH / 10th cent. CE).

The layers of translation and adaption illustrate the continued importance of the Greek mathematical tradition, though its actual role within eighteenth-century Ottoman science education remains to be studied. The work itself is nowadays considered a pseudo-Archimedean treatise, originally written in Greek.