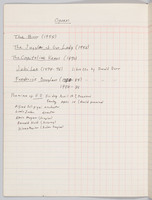 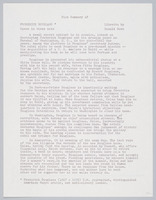 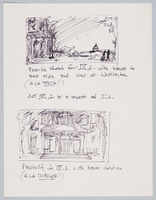 Kay wrote what would be his last opera, "Frederick Douglass," during the years 1979 to 1985. A massive work, it calls for five primary singers and four supporting roles, women's chorus (SSA), double chorus (SATB), children's chorus (SA), and orchestra, with an optional off-stage band. Kay kept track of how work on the opera progressed in his 1976-1991 diary, shown above right.

Donald Dorr, who had worked with Kay on other vocal compositions large and small, was the librettist. A typescript of the plot summary is shown above right.

Salvatore Tagliarino was the set designer, and his premiliary sketches for each of the three acts are shown here.